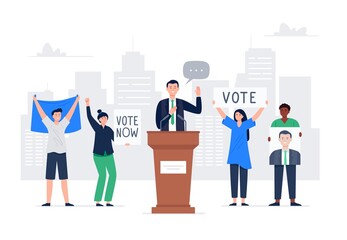 Become A Politician: Rule For The Betterment Of The Society! Find Out How? Know The Pros And Cons!

Who Is A Politician?

A politician is a person who is active in party politics and is holding or seeking office in government. Politicians propose, support and create laws or policies that govern the land and its people. Broadly speaking, a "politician" can be anyone who seeks to achieve political power in any bureaucratic institution.

Politicians are people whose positions range from local offices to executive, legislative, and judicial offices of regional and national governments. Some elected law enforcement officers, such as sheriffs, are considered politicians.

Politicians are known for their rhetoric, as in speeches or campaign advertisements. They are especially known for using common themes that allow them to develop their political positions in terms familiar to the voters.[ Politicians make heavy use of newspapers, magazines, and pamphlets, as well as electronic media. Nowadays they have branched into radio and television, making television the single most expensive part of an election campaign. They have become increasingly involved with the social media based on the Internet and smartphones.

Once elected, the politician becomes a government official and has to deal with a permanent bureaucracy of non-politicians. There are two main career paths which are typically followed by politicians in modern democracies. First comes the career politicians. They are politicians who work in the political sector until retirement. Second, are the "political careerists". These are politicians who gain a reputation for expertise in controlling certain bureaucracies, then leave politics for a well-paid career in the private sector making use of their political contacts. Many politicians have the knack to remember thousands of names and faces and recall personal anecdotes about their constituents?it is an advantage that serves them well in the long run. Many politicians were renowned for their memories.

Many critics attack politicians for being out of touch with the public. Areas of friction include the manner in which politicians speak, which has been described as being overly formal and filled with many euphemistic and metaphorical expressions and commonly perceived as an attempt to "obscure, mislead, and confuse". In the popular image, politicians are thought of as clueless, selfish, incompetent and corrupt, taking money in exchange for goods or services, rather than working for the general public good. Politicians in many countries are regarded as the "most hated professionals".