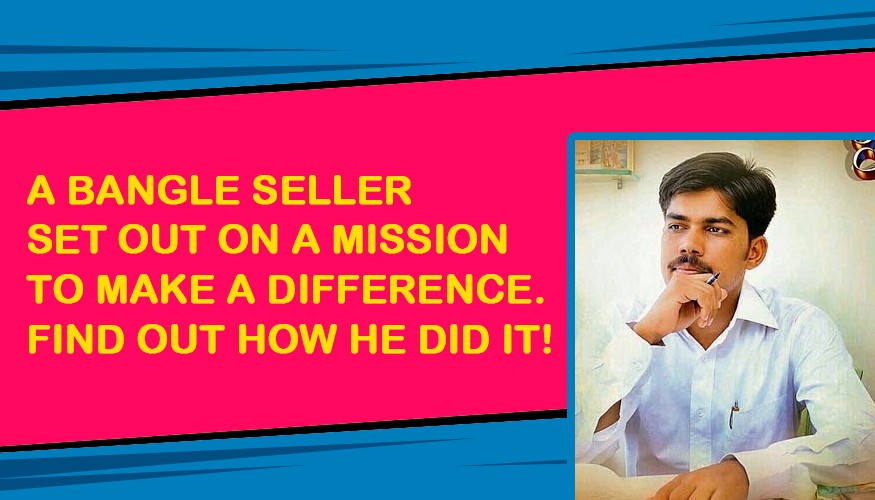 The Motivational Journey of Ramesh Gholap: Bangle Seller to Becoming an IAS Officer

Do you aim to be an IAS officer? Do you feel that it?s a difficult journey with all the studies involved? Then let?s read about the life story of Ramesh Gholap.

Ramesh is better known as Ramu in his village Mahagoan in Barshi district of Maharashtra. He was a bright child in his school. His father Gorakh Gholap ran a cycle repair shop, enough to provide an income for his family of four. As his father was an alcoholic, the cycle repair shop didn?t sustain for long. His mother, Vimal Gholap started selling bangles in nearby villages to earn an income to support the family. Ramesh and his brother joined their mother in selling bangles. He had polio in his left leg but that did not deter him from supporting his family. Ramesh and his brother would attract customers by calling out to them and their mother would help them try it on.

As Mahagaon had just one primary school, Ramesh later went to stay in Barshi with his uncle to study further. He studied well and was praised by his teachers. However, in the year 2005, when he was in class 12, he received the news of his father?s death. Ramesh didn?t even have the money to travel to his village but his neighbors helped him so he was able to attend the last rites of his father. After four days of his father?s death he had his chemistry model exam. He gave his exam after his mother insisted, but left the exams of all other subjects. He did not even submit his journals. The final exam for Class 12 was just a month away when he received a letter from his teacher that he had scored 35 marks out of 40 in chemistry. The teacher wanted to meet him. With help and encouragement from his teacher, Ramesh took his final exams and scored 88.5%.

Ramesh chose to do D.Ed (Diploma in Education) in spite of scoring so well, because this was the cheapest course he could afford to do to get a job as a teacher and support his family. He completed his D.Ed and also pursued a graduate degree in Arts from an open university simultaneously. He started working as a teacher in 2009. This was like a dream come true for his family. But, deep down, it was not what Ramesh really wanted to do.

Ramesh lived with his mother and brother in a small room provided by his aunt, who had a two-room home through a government scheme called ?Indira Awas Yojna?. He witnessed his mother visiting government offices to get a house for herself too under the same scheme, but she was turned away because her BPL (below poverty line) card wasn?t eligible. He was also upset with the ration shop owner who sold kerosene in the black market instead of providing it to needy families that deserved it. He had already been through the frustration of seeing his father not get adequate attention when he was admitted for tuberculosis in a government hospital.

During his college days, Ramesh was a member of student?s union and often went to tehsildar to get approval for various college issues. He considered tehsildar as an influential and powerful government official and decided to study for the public service exam to become a tehsildar, so that he could solve the problems faced by all the families.

In the meantime, he had also formed a political party with the help of some friends in his village of Mahagaon to fight the local Panchayat elections. His mother stood as a candidate for sarpanch. The mission of the party was to come to power and help the distressed. On 23rd October 2010, the results of the panchayat elections were out. Ramesh terms this as the biggest turning point of his life in his autobiography, ?Ithe Thambane Nahi? which translates to ?I Won?t Stop Here?. Ramesh?s mother, Vimal Gholap lost the elections by a few votes but the loss did not break Ramesh. Instead, it gave him the strength to stand up and fight against the system. On the same day, he announced in front of all the villagers that he was leaving the village and would come back only when he became a powerful officer.

He took leave from his job and went to stay in Pune to study for UPSC. The first teacher who met him was Mr. Atul Lande. He requested him to write the answers to a few of his questions like, what is UPSC? Can it be taken in Marathi? Was he eligible for it? And so on. The teacher told him there was nothing to stop him from taking the UPSC. This statement was all the encouragement he needed. Ramesh could not succeed in his first attempt so he tried again with more determination. He left the job and cleared the State Institute of Administrative Careers (SIAC) exam. Ramesh cleared UPSC in 2011 with an All India Rank of 287, without any coaching. He returned to his village on 12th May 2012, after becoming an IAS officer. He also cleared MPSC (Maharastra Public Service Commission) scoring the highest ever marks of 1244 out of 1800.

Ramesh Gholap, who is presently posted in Jharkhand, has given more than 300 informational and motivational talks to youngsters aspiring to take the MPSC or UPSC exams.

Well doesn?t this article inspire and motivate you? We would love to hear from you. Write back to us with your experience.