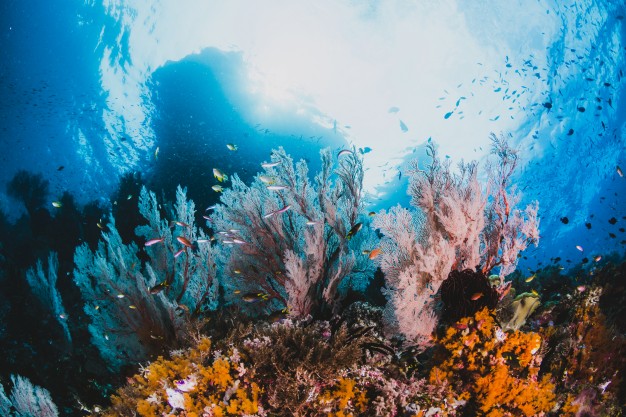 Can Marine Biology Be Marked As A Career? Yes! Maybe This is One!

Marine biology is defined as the study of living organisms present in the sea along. It includes their interaction with nature and their behavior.

Marine biology is defined as the study of living organisms present in the sea along. It includes their interaction with nature and their behavior. Some species live in the sea whereas some live on the land, so instead of taxonomy marine life is classified on the basis of the environment. From tiny layers present on the surface of the water where microorganisms live to the items trapped in between atmosphere and ocean, everything comes under marine biology.

Organisms that live in the ocean are known as marine life. Some animals, plants, tiny organisms such as archaea and bacteria fall under marine life.

Marine life ranges from the gigantic organisms such as blue whales to tiny organism such as bacteria. Thus, marine species have a huge diversity. It is broadly classified into two types and that includes:

Marine organisms are classified into 6 kingdoms.

? Protozoans: This is a single-celled organism and is much larger as compared to bacteria.

? Bacteria: This is also a single-celled organism. They are reproduced again and again by splitting itself in two. Bacteria help in providing nutrients to phytoplankton.

? Fungi: As fungi can?t produce their own food, they depend upon breaking down of organic material.

? Chromists: This ranges from seaweeds to small organisms like diatoms.

? Plants: plants are autotrophic and multi-cellular. To produce food plants use photosynthesis using sunlight. Mangroves and eel grass are examples of plants.

? Animals: Animals are heterotrophic. They depend on others for food. Sponges, jellyfish, sea stars, whales are some examples of marine animals.

A marine biologist is a person who studies about different types of sea creatures ranging from large ocean animals to microscopic organisms. They can become an oceanographic laboratory technician, a research scientist, work for zoo or aquarium, teach at colleges or high school or can also work for different universities or government agencies.

THE IMORTANCE OF MARINE BIOLOGY:

Marine biology is very important for our well being.

? Marine biologist understands climate changes and finds out profitable and sustainable ways in which human beings can utilize sea resources. They do this by doing research on ocean and marine environment.