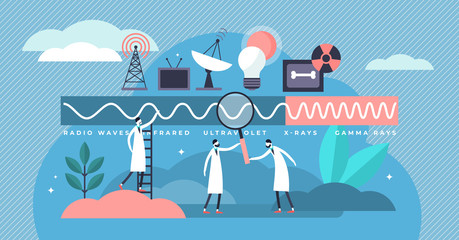 Heinrich Rudolf Hertz and the successful transmission of Electromagnetic waves

Heinrich Rudolf Hertz (22 February 1857 ? 1 January 1894) was a German physicist who first conclusively proved the existence of the electromagnetic waves

The principle of Hertz experiment:

It consists of two metal plates A and B placed at a distance of 60 cm from each other. The metal plates are connected to two polished metal spheres S1 and S2 by means of thick copper wires. Using an induction coil a high potential difference is applied across the small gap between the spheres.

Due to high potential difference across S1 and S2, the air in the small gap between the spheres gets ionized and provides a path for the discharge of the plates. A spark is produced between S1 and S2 and electromagnetic waves of high frequency are radiated.

Hertz was able to produce electromagnetic waves of frequency about 5 ? 107 Hz.

Wireless electricity is here! From wirelessly powered lighting to wireless chargers and even wireless smart homes, wireless transmission of power is an emerging technology with innumerable applications.

The invention of wireless power transmission is typically attributed to 20th century inventor Nikola Tesla, though the technology may have been in use much earlier.

The Tesla Coil in the experiment is small, and only generates a couple hundred thousand volts of electricity and will light up a fluorescent bulb held in your hand.

A fluorescent light bulb held near a Tesla coil will light up and spark, even without being plugged in!

A Tesla coil is a device for making very high voltages. Voltage is a way to measure how much energy an electric charge has. Tesla coil can make voltages of more than a million volts. The small one used in the demonstration makes about 60,000 volts.