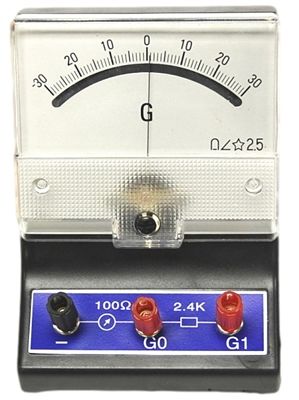 Importance Of Galvanometer And How It Can Be Used To Control Signal And Source Of Energy?

Galvanometer is an electromechanical device, an instrument, which is used to detect and measure electric current. They were also used as the analog measuring instruments (known as ammeters) to measure the direct flow of electric charge (current) that flows through an electric circuit.

Galvanometer is an electromechanical device, an instrument, which is used to detect and measure electric current. They were also used as the analog measuring instruments (known as ammeters) to measure the direct flow of electric charge (current) that flows through an electric circuit.

Galvanometer acts as an actuator (it is a component of machine that moves or controls a mechanism or system, requiring a control signal and a source of energy) and produces a rotator deflection in response to the current that flows through a coil in a fixed constant magnetic field.

There are various types of galvanometer. They are-

it works by using a compass needle to compare the magnetic field generated by an unknown current to the magnetic field of the Earth. It was used earlier. It was first given by Claude Pouillet in 1837. It contains an insulated copper wire coil on a non-magnetic circular frame.

it does not use the Earth?s magnetic field for measuring the current. It was developed by Leopoldo Nobili in 1825. It contains two magnetized needles that run parallel to each other, suspended by a silk thread, with their magnetic poles reversed. The lower needle gets deflected by the passing current?s magnetic field. The second needle cancels out the diapole movement of the first one to cancel out the effects of Earth?s magnetic field.

it is used to achieve higher sensitivity for detecting extremely small currents. It contains horizontal magnets which are suspended from a fine fiber inside of the vertical coil, with an attached mirror to its magnets. A beam of light reflects from the mirror acts as a long mass-less pointer by falling on a graduated scale across the room.

it is sensitive in mature and used to measure the quantity of charge that is discharged through it. The moving part of the galvanometer has a large moment of inertia, giving it a long oscillation period. It may be of the moving coil type or of the moving magnet type.

There are various uses of galvanometer. They are-

? They are used for positioning and control systems.

? They are also used for controlling the head positioning servos in the hard drives and CD/DVD players.

? They are also used to get photoresistor readings in the metering mechanisms of a film camera.