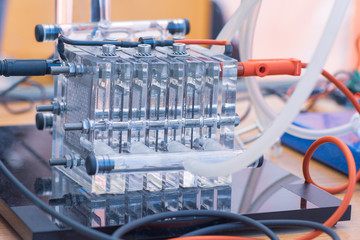 Scientists Explore A New Experiment to Generate Electricity! Find Out!

The idea of using the force of gravity to generate power has been around for some time. As far back as the 1970s, for instance, scientists were discussing the theoretical possibility of tapping into the gravitational pull of black holes to generate power [source: Time]. The idea was that if the matter could be fired at a black hole from a safe distance (so the firing device wouldn't be sucked in), the extreme squeezing of that matter by the hole's gravity would make it hot enough to start a fusion reaction.

The Gravia lamp relies on a much simpler concept: Gravity pulls objects downward.

A person attaches five 10-pound (4.5-kilogram) brass weights to a ball screw near the top of the lamp.

The platform immediately starts dropping along the screw, which is aligned along the length of the lamp. As the platform makes its way down the screw, the screw spins. This converts the downward motion of gravity (acting on the weights) into the rotational motion needed to spin the gear near the bottom of the lamp.

The spinning gear, in turn, spins a generator -- a rotor/stator assembly that converts the rotational motion into electricity.

The electricity powers 10 LED bulbs, which light up and illuminate the acrylic housing of the lamp.

All of this happens over the course of four hours, and the LEDs, which light up a few seconds after the weights start to drop, remain on for that full period. They emit between 600 and 800 lumens, which is comparable to a typical 40-watt bulb. When the weights make it to the bottom of the lamp, the LEDs go out, and the person who started the chain of events has to input more power by moving the weights back up to the top of the screw.

The generator works by unbalancing a weight so that gravitational energy becomes available as input to a piezo generator. This means that a gentle breeze is enough to generate electricity.

A practical scheme for generating electricity using gravitational energy is presented. The scheme uses a set of massive underground spinning wheels, each wheel is fitted with a mechanism to receive and transmit gravitational torque pulses from a passing vehicle to keep the wheels in motion. Each wheel in combination with an appropriate gear system then acts as the prime mover of an alternator which produces the electricity. Design formulae relating to the power gain and the overall efficiency of the energy system are then developed. The numerical results presented in the paper indicate that a power gain of as high as 10 and an associated efficiency of conversion close to 92% can be easily achieved with reasonable design of the system.