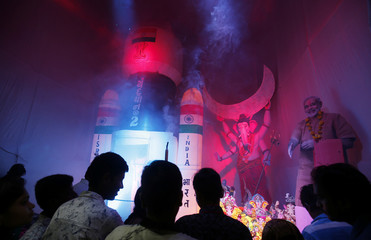 Chandrayaan-2 Gets Closer to the Moon in 48 Days!

Chandrayaan-2 was scheduled to launch on 15th July but was called off an hour before the launch time because of a few technical issues. Finally, it was launched on 22nd July from Satish Dhawan Space Center at Sriharikota aboard a GSLV MK-III and will land on the moon on 7th September, 48 days later.

ISRO has described the details of the path which will take a longer time compared to Moon Missions by other space agencies. The path involves more revolutions around the Earth by injecting it into an Earth Parking Orbit 170 x 39120 km wide to be able to take advantage of the Earth's Gravity in performing a slingshot maneuver to get into the Lunar Transfer Trajectory while escaping Earth's sphere of influence. The spacecraft will then be slowed down by on-board thrusters as it enters the Moon's sphere of influence for Lunar Capture. The Orbit of Chandrayaan-2 around the Moon will be circularized to 100x100 km orbit through a series of orbital maneuvers. After which the moon lander Vikram will land near the South Pole on 7th September. The rover Pragyan will roll out and carry out operations for 1 Lunar Day (14 Earth Days) while orbiter will be operational for a year.

The Mission takes longer to reach the Moon compared to other missions because of the longer path that it had to take because of the lack of a powerful propulsion system. In Apollo 11, the first manned mission to Moon it took them 4 days 6 hours and 45 minutes to land on the Moon. The reason for lesser time is that NASA's Saturn V that was used to launch the command, service and lunar modules into the Lunar Transfer trajectory had a lifting capacity of 43 tonnes at a speed of 39,000km per hour. The Saturn V launcher and lunar craft were powerful enough to do travel to the Moon in just 4 days, but they were that expensive too. While IRSO has gone the cost-efficient route by taking more time but investing less money into the mission. ISRO is known for its economical missions worldwide successfully.

Chandrayaan-2 might just be another successful frugal mission by ISRO, but it is a testament to the ability of each person that was involved with the mission. No matter the time it takes the Endgame of the mission must be the centre of attention which is leaving bigger footprints in space and contributing to the scientific community.