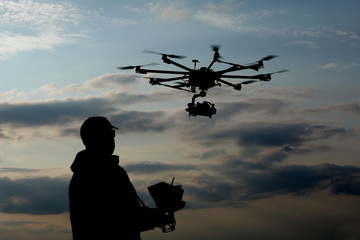 Become A Drone Pilot: Touch The Skies With A Career In Aviation?Find Out!

An unmanned aerial vehicle (UAV) (or un-crewed aerial vehicle, commonly known as a drone) is an aircraft without a human pilot on board and a type of unmanned vehicle. UAVs are a component of an unmanned aircraft system (UAS); which include a UAV, a ground-based controller, and a system of communications between the two. The flight of UAVs may operate with various degrees of autonomy: either under remote control by a human operator or autonomously by on board computers.

Compared to crewed aircraft, UAVs were originally used for missions too "dull, dirty or dangerous" for humans. While they originated mostly in military applications, their use is rapidly expanding to commercial, scientific, recreational, agricultural, and other applications, such as policing and surveillance, product deliveries, aerial photography, smuggling, and drone racing. Civilian UAVs now vastly outnumber military UAVs, with estimates of over a million sold by 2015.

Drone pilots need to be capable of performing maintenance on the drones and assessing how effectively their systems are operating, so they need to have some mechanical training. While it may be possible to enter this field with a high school diploma and experience, the majority of those who are employed as electro-mechanical technicians have a postsecondary certificate or associate's degree. Experience using computers is an asset so those considering this career field may want to take computer classes. Those with a high school diploma also have the option of gaining training through the military.

Drone pilots need to have strong communication skills so that they can convey plan information and other types of data effectively. They may need to respond to issues with the drone or flight path while operating the drone, so they should be able to process information and identify solutions to issues effectively. Their duties involve checking the drone to ensure it's operating properly before being deployed, so they need to have electronics and mechanical skills. Since they may have to fly the drone, activate equipment on the drone to do things such as take photographs, and monitor the drone's systems at the same time, it is important that drone pilots are capable of multitasking.