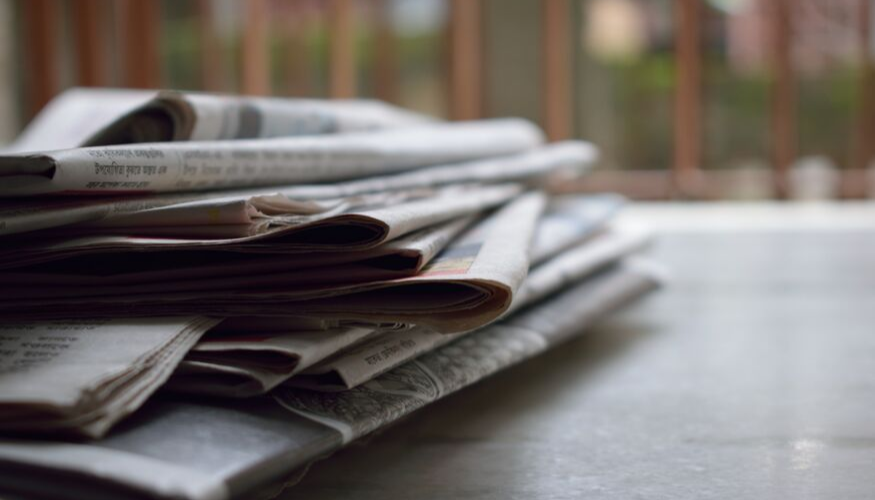 Journalism: If You Think, You Ask Too Many Questions... You Can End Up Being A Journalist!

Journalism will kill you, but it will keep you alive while you?re at it
?Horace Greely.

Journalism is beyond a profession. It is an art. A public defense system. Journalism is expression. It is a mirror held against society. It is the first draft of history. Let?s study this dynamic occupation and its aspects in detail.

Journalism is the production and distribution of reports on recent events. The word journalism applies to the occupation, as well as citizen journalists using methods of gathering information and using literary techniques. Journalistic media include print, television, radio, the Internet, and, in the past, newsreels.

Concepts of the appropriate role for journalism vary between countries. In some nations, the news media are controlled by government intervention and are not fully independent. In others, the news media are independent of the government but instead operate as private industry motivated by profit. In addition to the varying nature of how media organizations are run and funded, countries may have differing implementations of laws handling the freedom of speech and libel cases. The advent of the Internet and smartphones has brought significant changes to the media landscape in recent years. This has created a shift in the consumption of print media channels, as people increasingly consume news through e-readers, smartphones, and other personal electronic devices, as opposed to the more traditional formats of newspapers, magazines, or television news channels. News organizations are challenged to fully monetize their digital wing, as well as improvise on the context in which they publish in print. Newspapers have seen print revenues sink at a faster pace than the rate of growth for digital revenues.

WHO IS A JOURNALIST?

A journalist is a person who works in journalism to report the news. They may work on their own ("freelance") or for a newspaper, a radio or television program. There are different kinds of journalists. A reporter is a type of journalist who researches, writes, and reports information. Newspaper reporters write news articles and stories for newspapers. They write these articles and stories by interviewing people, asking questions, and doing research.

Journalists sometimes expose themselves to danger, especially when reporting in areas of armed conflict or in places that do not respect the freedom of the press. Organizations such as Reporters Without Borders publish reports on press freedom and advocate for press freedom. The Committee to Protect Journalists has reported that as of 1 December 2010, 145 journalists were imprisoned around the world for reporting the news. Current numbers are even higher. The ten countries with the most journalists currently imprisoned are Turkey (95), China (34), Iran (34), Eritrea (17), Burma (13), Uzbekistan (six), Vietnam (five), Cuba (four), Ethiopia (four), and Sudan (three).

Freedom of truth and expression is our constitutional right. And yet, journalists live under constant fear of being imprisoned for supporting the truth. It is important to value your ethics and morality as responsible journalists. You must make sure that you do not offend a religion, community or the sentiments of individuals.

QUALIFICATIONS FOR A CAREER IN JOURNALISM:

To become a journalist, you'll need a bachelor's degree in either journalism or communications. While completing your degree, you can choose to specialize in either print or broadcast journalism. Work experience, such as an internship with a media outlet, is important to help you secure a job in this field, which has become more competitive in recent years.

Journalists analyze and interpret facts and information about local, national and international events and report them to the public. Most journalists complete bachelor's degree programs to prepare for careers in either print or broadcast journalism. Work experience is important for aspiring journalists, so most degree programs include an internship.

Journalists also referred to as reporters and correspondents, have bachelor's degrees in either communications or journalism. All journalism majors take courses in editing, journalistic ethics, reporting, feature writing, photojournalism, and communications. Additional coursework is determined by whether a student is focusing on print or broadcast journalism. Students either take courses to strengthen their writing skills or to learn radio and television production techniques. Those concentrating on online media learn software and web design skills, as well as how to combine text with graphics, photos, and video media. Undergraduate students also benefit from professional internships with media outlets, completed either during the summer or during the semester.

QUALITIES OF A GOOD JOURNALIST

The public expects and deserves prompt, accurate and objective information. Professional newspaper journalists dedicate their life to reporting the news no matter what the personal risk. For instance, newspaper journalists may rush to the scene of an ongoing hostage siege, school shootings or natural disaster to interview police and witnesses. If you are thinking about a journalism career, ask yourself if you have the qualities of courage, integrity, and fairness. You also need superior written, verbal and interpersonal skills to excel as a newspaper journalist.

A solid ethical core characterizes a good journalist. Fairness, objectivity and honesty matter when reporting everything from local referendums and proposed state tax increases to presidential elections. Professional journalists abhor fake news based on rumor, innuendo, and unverifiable anonymous tips. Reporters should only share opinions in newspaper editorial pieces. They step aside if covering that story would be a conflict of interest, such as writing a feature article about a family member?s new bistro.

Good journalists push themselves to dig deeper and ask tough questions. They put personal feelings aside to boldly unearth the truth about newsworthy people, places and events. Courage is vital to investigate what is happening at the scene. They are not satisfied making phone calls from a comfortable desk in the newsroom when covering major happenings. For example, newspaper journalists may travel to the scene of dangerous floodwaters in their community and talk to volunteers who are helping sandbag a faltering dam.

Along with impeccable character, newspaper journalists must be skilled communicators to interview sources and write in-depth stories. Unlike radio, television or online journalists, they go far beyond sound bytes and superficial coverage of a situation. Newspaper journalists include background information and needed detail to give context to a more nuanced understanding of the issue by the reader. Typically, journalists have a bachelor?s degree in communication or journalism and relevant undergraduate experience, such as writing for their college newspaper. You must be highly proficient in English grammar, technical writing and proper attribution of sources to be a good newspaper journalist and not lose your job.

As part of their job, newspaper journalists follow and use social media appropriately to provide immediate and transparent coverage of happening events. They know how to use the internet to research stories and access public records when engaging in investigative journalism. Technology, such as Facebook and LinkedIn help them contact potential sources to request information or an interview. They also maximize the use of technology to instantly inform the public about matters that may directly affect their health and safety, such as a food recall.

Good newspaper journalists have an analytical mind and base stories on evidence and facts, not emotion. They are astute observers and instinctively sense when there is much more to a story than what is being shared at a news conference, for example. Critical thinking skills are crucial when weighing conflicting accounts of an incident and assessing the credibility of sources. They exercise sound judgment when blogging or writing yet unverified information on the newspaper?s website during a breaking story. Even when faced with looming deadlines, good newspaper journalists take time to get a balanced accounting of the subject.