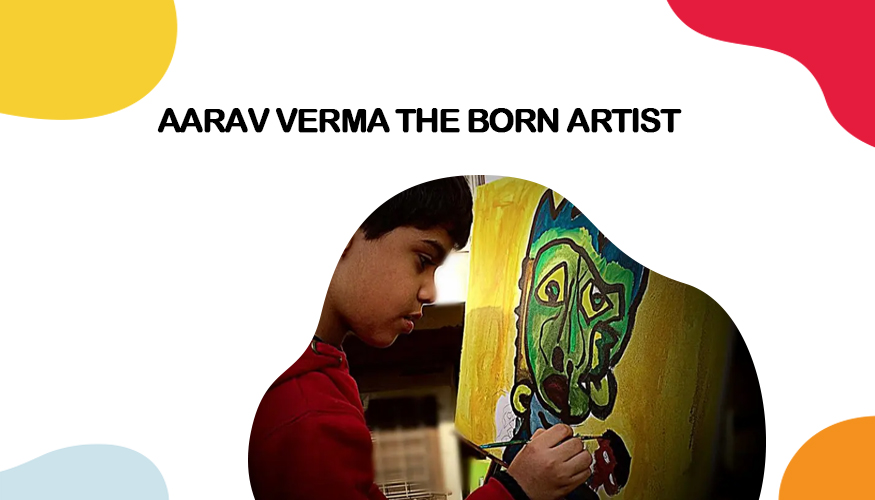 Aarav Verma: The 13 Year Old Artist For A Cause, An Inspiration to the Nation?!

The fine arts is an incredibly difficult skill to hone and requires an immense amount of practice and patience along with crafting a unique style and perspective that will appeal to an onlooker and be able to tell a story with nothing but color and the version of an image. It is important to remember that art like painting does require a certain level of natural born talent that just cannot be developed from the lack of it. The ability to portray emotions through a canvas is similar to knowing a language and it must in some ways; translate to appeal to a person?s sensibilities. Aarav Verma is a 13 year old boy that is a testament to this as he has been painting and creating art since before he knew the alphabet. Aarav, who many may consider a seasoned artist due to the fact that it has now been his tenth year of painting , has a wonderfully unique perspective that he portrays with the use of abstract drawings of characters embellished in bold and vibrant colors. His talent and his technical skill is well beyond his years and is widely revered by his contemporaries and critiques alike. He has performed, that is, painted standing alongside Grammy-award winning sitar maestro, Ustaad Shujaat Khan and was appreciated greatly for the visual and auditory treat it had been.

Aarav?s paintings are bought by collectors and are paid for generously. However, as one would expect any child to, he has not wasted the money on frivolous materialistic purchases and has instead put it into use in order to help the people of his country. Aarav?s paintings have raised a sum of Rs 55,000/- and the proceeds went to the Shri Ram Krishna Cancer Hospital, Deoband. Additionally, In 2018, when the devastating floods struck Kerala, there was a great outpouring from all quarters of India and the world to help the victims in any way they could. Aarav, he joined the NDTV-Tata sky telethon campaign to raise money. Faber Castell bought the painting that he made for the campaign for Rs. 3 lakhs. It is beautiful to see that children of today have such kind hearts and insight into the happenings of the world and it provides hope that the next generation of our country are as great as he is turning out to be.