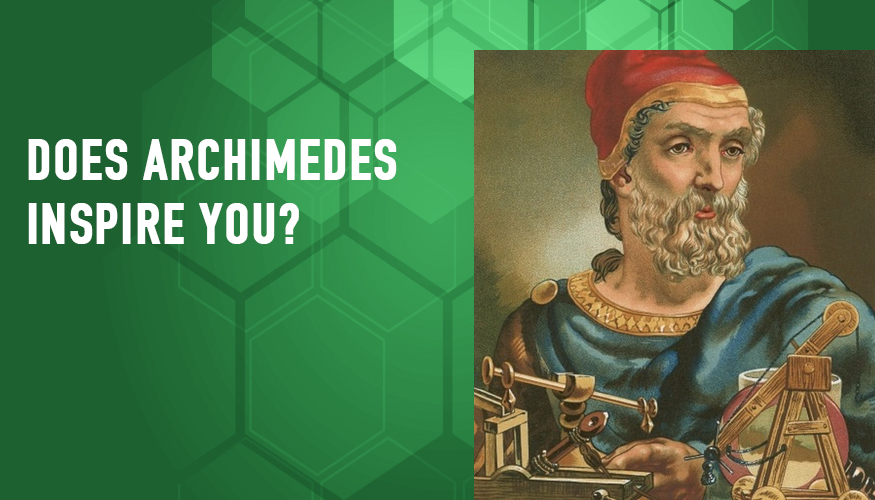 ARCHIMEDES: A Scientist Who We Remember Even Today! Let Us Find Out!

Archimedes, the mathematician and scientist of ancient Greece was and is considered as one of the greatest mathematician of all times. He was born sometime around 287 B.C. in Syracuse, Sicily. His father Phidias was an astronomer and not much is documented about him. Perhaps, Archimedes studied at Alexandria and Egypt under the disciples and followers of the great Euclid.

Archimedes was related to king Hiero of Syracuse and was his close confidante. He helped the King in inventing many war machines which were successfully used in defending Syracuse. During that period, the Roman General Marcellus tried to invade Syracuse and was stunned by Archimedes?s inventions. Heavy engines hurled great mass of stones over the advancing Roman ships and sunk them. Many Roman soldiers along with the sinking ships died leaving Marcellus shocked and dismayed by these never-before seen inventions.

King Hiero of Syracuse encouraged Archimedes to invent more missiles and Archimedes obliged. Thus he secured his name in history as the first to invent missiles. Similarly, his invention of the gadget now known as the Archimedes screw made him very famous. This pump is still in vogue in many parts of the world.

Archimedes? spirit was so high and his soul so profound that he would not leave behind any sort of writing or commentary on the scientific inventions that he had devised for his King. That was because he felt that the whole trade of Engineering as sordid and ignoble. Perhaps he might have envisaged the ill effects of his inventions which can lead to large scale destruction of humanity. Coming back to this genius mathematician, he worked diligently on his pet subject and eventually became famous during his own life. Most historians will agree that he is the greatest. Archimedes discovered pi. The roman biographer Plutarch, a great admirer of Archimedes has written his biography and we source all the details of this great man form it.

Archimedes had a great fascination for corresponding with fellow mathematicians of his era.

The works of Archimedes:

He wrote 2 books on plane equilibrium and 2 books on quadrature of the parabola. He also wrote on the sphere and cylinder, and 2 books on spirals, conoids, and spheroids. He also wrote on floating bodies and measurement of circle, the Sand Reckoner and the method. The book on plane equilibrium deals with principles of mechanics using the methods of geometry. He discovered the fundamentals concerning the centre of gravity of plane figures. On the sphere of a cylinder, he says that the surface of a sphere is 4 times that of a great circle and that the volume of sphere is 2/3 the volume of circumscribed cylinder.

On spiral, he defines a spiral and gives fundamental properties concerning the length of the radius vector with the angles thru which it has revolved and on floating bodies, he lays down the basic principle of hydraulics. Archimedes principle is contained here. A funny anecdote and the story behind this discovery is that Archimedes discovered his theory of buoyancy called the Archimedes Principle while taking a bath. When he stepped into the bathtub and saw the water overflow, he was so excited that he rushed home naked from the public bath through the streets of Syracuse shouting Eureka! Eureka! (I have found it I have found it).

He used this discovery to prove that the goldsmith of Syracuse had adulterated the gold crown with silver. The story goes like this. The King of Syracuse had suspected that the solid gold crown which he had ordered was partly made of silver and asked Archimedes to find out the anomaly so that he could punish the rogue goldsmith. First Archimedes took 2 equal weights of gold and silver and compared their weights when immersed in water. Next he compared the weights of the crown and pure silver crown of identical dimensions when each was immersed in water. The difference between these 2 comparisons showed the crown was not of solid gold. That was his Eureka moment.

Archimedes invented what is known as Archimedes? screw, a devise to raise water. It consists of a broad threaded screw inside an inclined cylinder. As the screw is turned, the water is raised gradually between the threads and is run off the top. Today we see these modern screw pumps which are still useful for pumping sewage in waste water treatment plants.

His compound pulley and use of levers also brought him much fame. He derived great joy in inventing the lever and was said to have remarked ?Give me a place to stand and rest my lever on and I can move the earth?.

Added to all this, his contribution to the development of geometry has been immense. He performed many geometric proofs and excelled in computing areas and volumes using the method of exhaustion. His methods anticipated the integral calculus 2000 years before Newton and Leibniz.

His works on integration gave birth to the calculus of the infinite conceived and brought to perfection by Kepler, Cavalier, Format, Leibniz and Newton.

Archimedes was buried at Syracuse.On his grave there is an inscription of pi, his most outstanding discovery. A figure of sphere was also placed on his tomb stone.