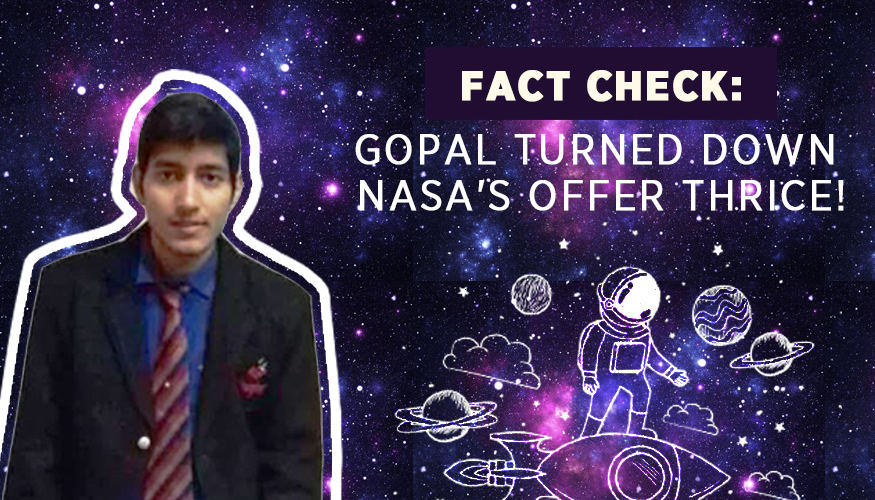 Gopal, a 19-year old who hails from Dhruvganj village in Bhagalpur, Bihar, has consecutively turned down NASA's offer thrice. The first thought that crosses one's mind is : who would decline NASA's offer? People struggle their entire life to get an opportunity like this. However, Gopal refused the offer to work for his country. Even US President Donald Trump has invited him, but he has been firm with his decision. At this young age, Gopal already has the patent for eight different inventions. Most of these innovations are sustainable, which could lead to revolutions in the future. Currently, the young scientist is working in the lab of the Government Graphic Era Institute, Dehradun and is looking forward to opening a lab in Jharkhand and do research there.

Gopal completed his 12th standard from Model High School, Tulsipur. He has been rewarded the 'Inspired Award' for the invention of Banana Bio Cell in 2013-14. He was in the tenth grade then. In 2008, everything was ruined due to floods that occurred in his village. His father Premaranjan Kunwar, a farmer, was worried about his son's education as they lost everything in the natural calamity. However, despite the obstacles, Gopal did not give up. He thought about doing something in order to get a scholarship. On August 31st, 2017, Gopal met Indian Prime Minister Narendra Modi, who sent Gopal to NIF, Ahmedabad. Gopal made six inventions there and is now named among 30 Startup Scientists in the world. His fame has reached the world, which can be gauged by the fact that world's largest science fair is going to be held in Abu Dhabi in April, which will include 6000 scientists. This genius boy, Gopal, will be the chief speaker in it.