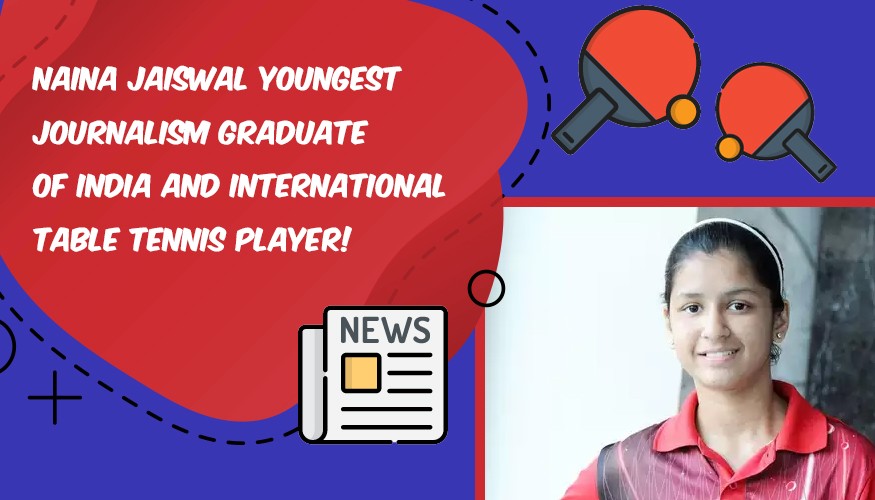 Naina Jaiswal : Story of the 16-Year-Old Girl Becomes the Youngest Post-Graduate in Asia!

In many parts of India, the birth of a girl child is not usually welcomed. Right from her birth, she faces discrimination, humiliation, and oppression at every single stage of life. Even today, in many places families and parents consider girl child as a liability and a boy as their asset, which is why most of them do not even will to spend over girl?s education and career. These people believe that women don?t really deserve education as they feel women are only meant for household chores. For them, a woman making a career in sports is just an indigestible fact.

However, a coin always has another side. Here the other side of the coin is Ashwani Kumar Jaiswal and his wife Bhagyalakshmi, parents of Naina Jaiswal.

When Naina was born in the year 2000, Ashwani?s friends and relatives reminded them that it was time for them to start collecting and saving gold jewelry in preparation of her marriage, but he pooh-poohed the suggestion telling them that he would not invest in jewelry for her but rather turn his daughter into a golden girl. People couldn?t have stopped laughing but Ashwani never gave up. This was the motivation which turned into sheer hard work, perseverance and determination for his daughter, who became the youngest in India to clear the class ten exam - when she was just eight years and two months.

Sounds almost impossible, isn?t it? Well, that?s not it, there?s much more to her success story that will leave you astonished!

Naina Jaiswal is a not so ordinary girl: she loves to study and play table tennis. Yet neither of those facts does justice to this incredible woman. So, what?s so extraordinary about her?

Naina is a girl wonder who remains to be an all-rounder. She?s someone who is a table tennis champion from Hyderabad, she is known as the youngest post-graduate not just in India but Asia as a whole, plays piano, can make some yummy Hyderabadi biryani in just 25 minutes and is the youth inspiration in India as she motivates youth with her talks, has been the brand ambassador for the Election Commission of India and can do a plethora of other things at a very young age and it is all because of her father.

After all, the father had wanted to change people?s outlook that ?daughters are a liability? by bringing up his daughter as a golden girl and a successful individual. So, he also trained her in spiritual matters, which led to Naina reciting 108 shlokas from the Ramayana by heart at the age of 7. If you think that?s enough, you must also wait to know that she can operate CS2, Corel draw and Photoshop in computers and can type A-Z in 2.72 seconds. Can you?

You might sigh heavily reading all of it together at once, but this multi-talented girl did not stop.

Her parents also inculcated an interest in sports, music, and arts in her. They firmly believed that it?s not always that a child is inclined towards only studies, and even if they are, they perform well academically. In fact, if he/she possesses extraordinary talent, they can always make good use of it and make a successful career out of the same.

While most children of her age were preparing for their class 10 board exams, this little girl from Hyderabad crossed that milestone years ago. Naina became the first girl from Asia to appear for the class 10 boards at the age of 8 and passed it with flying colors.

According to reports, Naina cleared her Intermediate from the Andhra Pradesh State board at the age of 10 from St. Mary?s College in 2010 and later in 2014, she completed her Bachelor?s in Arts (B.A.) in Mass Communication from Osmania University at the age of 13, becoming the youngest journalism graduate in India.
Then she went on to do her Master?s (MA) in political science, picking up the degree at the age of 15 and subsequently enrolling for Ph.D. at the age of 16. Currently, Naina is pursuing the research programme at Adikavi Nannaya University in Rajahmundry.

Being a professional motivational speaker, until now she has made about a hundred of speeches on the theme ?Empowering the Girl Child? in multiple languages like English, Hindi, Telugu, and Urdu. These speeches have been delivered in various schools and colleges, not only across Indian states like Andhra Pradesh, Telangana, Kerala, Madhya Pradesh, Maharashtra, Rajasthan, Haryana, and Uttar Pradesh but also in the US, Singapore, Muscat, and Oman.

If you still feel that all this was possible because she could be an exceptional child or a god?s gift, you?re failing to take note of the real efforts and the hard-work that was put by her parents, especially her father.
Don?t believe it? Then you must know that, Mr. Jaiswal had pulled his daughter out of school right after class three and she was home-schooled. Since he was disillusioned with the current education system, he decided to coach Naina at home along with his wife?s help. He had been an educationist for 35 years.

Naina never ceases to amaze us with her capabilities! The aspiring minds usually set the sky as the limit. This seems to be a running theme in the Jaiswal family. Interestingly, Mr. Jaiswal had decided to educate his son Agastya, too, at home and surprisingly he achieved the same result. Agastya cleared SSC Board exams at the age of eight with a 7.5 GPA. Agastya Jaiswal, who is currently just 11 years old, has appeared for the ongoing Senior Intermediate Examination.
Well, we can say that genius is something that?s normal for the Jaiswal family!
While coming back to Naina, her future certainly looks bright as she is looking forward to marking her presence in the 2020 Olympics.