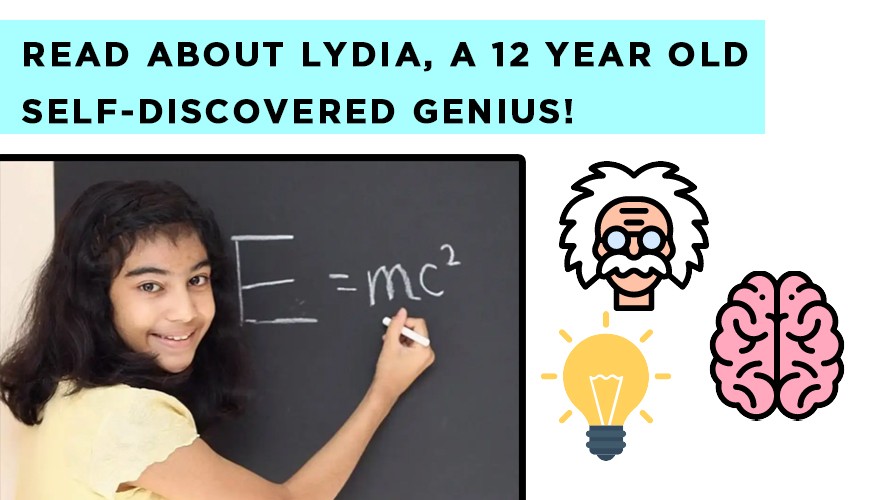 The Story Of Lydia Sebastian | Einstein Brain At Age 12!

Well, there is no scientifically valid description of a genius but in an ordinary term, we can say that a ?genius? is an individual who demonstrates extraordinary mental capacity, artistic creativity, the universality of styles or uniqueness, usually to a degree that is synonymous with the accomplishment of modern developments in the field of science.

Now that we?re talking about geniuses what comes first to your mind? Albert Einstein! Isn?t it?

There is a reason that the word ?Einstein? is synonymously used with the term ?genius?. Albert Einstein has been one of the brightest minds of the 20th century and his dedication to human intelligence is unmatched.

What does it take for one to be a genius or be called an Einstein?

Being a genius is different from just being super-smart. Intelligent individuals are a handful or two, and half of them don't care that much. The capacity to bring innovation to nearly any scenario is what matters.

There are a multitude of abilities and traits that make a thinker. IQ ratings are one of the most practical and accurate indicators for classifying people's mental capabilities. The standard Intelligence Quotient (IQ) varies from 85 to 115 (depending on the Stanford-Binet scale). Only about 1% of the world's population has an IQ of 135 or more.

Geniuses or relatively close-geniuses have an IQ 140 to 164. Less than quarter of 1% fall under this group.

And this is the reason that, during teenage years when many teenagers are struggling with identity crises and peer pressures, Lydia Sebastian has become a well-known personality.

Lydia Sebastian, a 12-year-old Indian origin child from Essex, England is one of those who fall under the category of geniuses. You will be shocked to know that she scored the maximum possible score of 162 on the Mensa IQ exam (which is among the most difficult intelligence tests in the world ? Cattell III B paper offered by Mensa, the high IQ society) outscoring the score sheet of brilliant physicists like Albert Einstein and Stephen Hawking. It is a whole two points higher than the estimated IQs of Einstein and Hawking.

The test challenged her to solve the analogies, to describe lesser-known terms and to solve brain teasers.

Lydia's dad, Arun Sebastian claimed that he knew his daughter was intelligent, but not that intelligent.

She started to talk when she was just a few months? old and read books when she was an infant. At the age of 12, she sailed through the seven books of the ?Harry Potter? franchise a total three times.

Aren?t you curious to know more? Let?s go a little deeper into her life story.

Lydia was raised to 43-year-old Arun Sebastian, a radiologist at Colchester General Hospital, and to mother Erika Kottiath, a deputy director at Barclays Bank. Her family came from 'The Divine Home Land,' that is, Kerala and established in Langham, Essex, UK.

After pestering her parents and checking online for the right IQ exam, Lydia took the Mensa test. It was during school holidays when she decided to attend the Cattell III B paper.
She reported at the Birkbeck School, London, for the examination. The exam was simple for her, although she was anxious at first. She had completed the exam with two minutes to spare.

Lydia has been an A-grade student at Colchester County High School in Essex, a prestigious girls' school whose students include BBC radio controller Helen Boaden and GB Olympic gold medalist Saskia Clark.
Her favorite subjects involve physics and chemistry, so she wants to have a math-related job when she's older. She has also been playing the violin since she was 4 years old.

She has lately also applied to join Mensa, which has 20,000 members in the UK. Lydia Sebastian seems to be a courageous and clever girl who will make India proud in the future as well. High intelligence score indicates, by definition, that an individual may have advanced thought, perform better than a regular one. The best thing is she discovered her own talent and demonstrated it. We can only hope she does well in her area of interest.

There are many great minds in our world. They just need the right path to follow.

If you think you?re a genius or know someone who falls under the category, do share it with us, we?ll help you share the person?s calibre with the world!