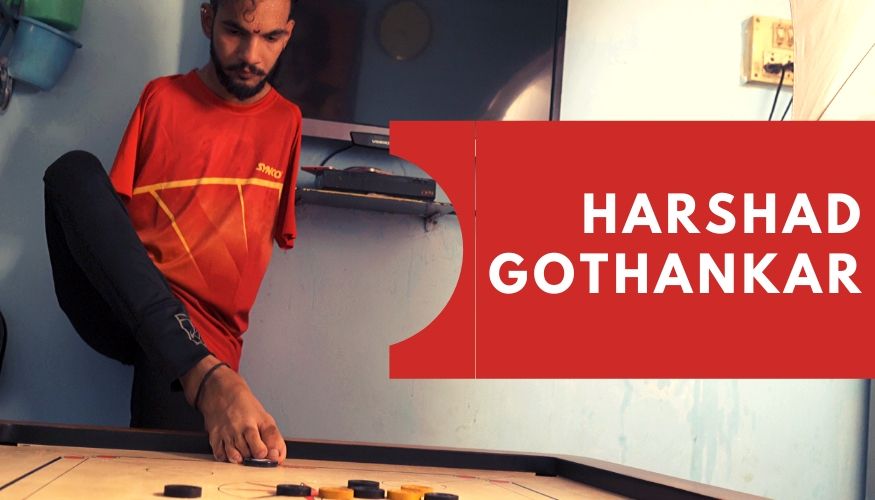 Harshad Gothankar: Rising Above Disability, the Story Of A True Hero

Meet Harshad Gothankar, an inspiration who was born without hands but, in his words, has lived hands-free and still manages to juggle the obstacles of life, playing carom and the football with flair and panache.

Harshad has no recollection as to how it all began. The complications started after he was born. However, this did not deter his parents in dreaming big for him. His baba (dad) always wanted him to study with other 'normal' kids and he was against the idea of him studying in any other ?special school? or ?school for the disabled?. Plus, those ?Special Schools? were located far from his place. So, his dad knocked the doors of every school possible in adjoining areas. These schools although expressed sympathy towards his condition, gave the same excuse stating they weren?t equipped to help with his condition and kept directing them to 'Special Schools'. Finally, a friend of his dad?s assisted them in speaking to Karachi High School, Mumbai that showed little sign of acceptance. After days of convincing, they agreed to take him in, provided that he should be able to learn to write with his feet WITHIN ONE WEEK!!!

What all can he do:

Football has always been Harshad's passion, and Cristiano Ronaldo, Lionel Messi, and Neymar are his idols. He says he always tries to emulate their skills and moves in his game.

Other than Football, he is adept in carom, swimming, athletics and can even play cricket with his feet but of course not as competitively. However, tennis and Badminton are complete blockers for him.

Harshad writes, paints, plays and even eats with his feet. He has made himself totally reliant on his feet and he uses his feet for all daily activities.

We should truly respect and salute this huge inspiration for his determination in fighting the predicament and pushing himself to achieve the impossible. We, despite having a full set of limbs, take things for granted where a simple fracture makes us squirm, while Harshad Ghotankar fulfills each and every task without losing his natural charm and style. We need to look at Harshad here and think about the things we always wanted to do and/or achieve and analyze why haven?t we achieved the same? What?s stopping us? What is your excuse?