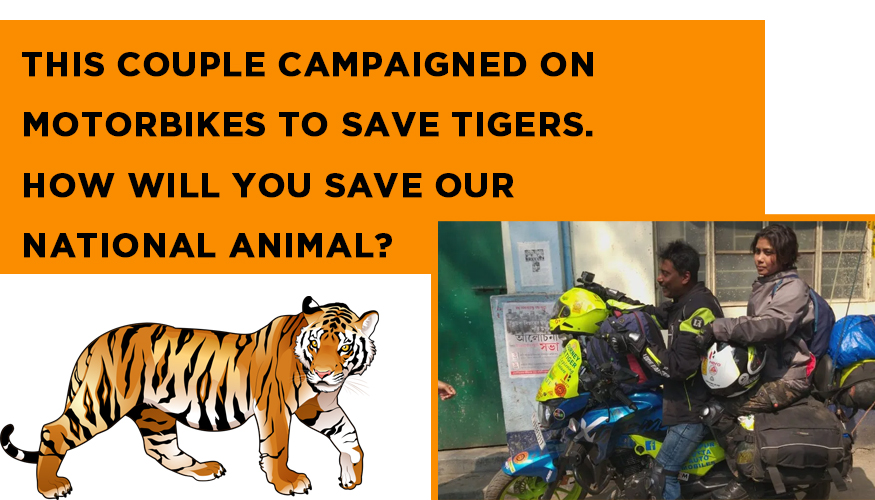 Tiger And The Need To Save Them From Extinction:

Tiger is one of the most threatened species on earth. Apart from this, tigers are an integral aspect of Indian society. Tigers are the national animal of India. They have been a sign of magnificence, strength, grace and ferociousness since time immemorial and are a symbol of bravery and courage. The tiger also has a famous role in Hindu myths as the mount of the Goddess Durga.

The existing population of these adorable big cats has dropped as many are hunted : this has significant consequences on the environment as tigers play a vital part.

If the tigers are killed, the whole ecosystem will crash.

Home for tigers = refuge for everyone

With just one tiger, we're securing about 100 square kilometres of land. To save tigers, we need to preserve forest environments in Asia where they reside and by protecting these areas, we can not only encourage tigers to roam freely, but also many other threatened animals that reside there add to our biodiversity.

Tigers are a security blanket for many people. Tigers will directly support some of the populations in the world.

Tigers attract tourists and this helps to raise revenue for inhabitants with little ways to make a living. Tiger management programs also help provide alternate livelihoods for poor populations, which are not only more productive but may also increase income levels.

Tiger is a champion

Now this large cat is being captured, skinned, and forced out of his house and it clings to life. In a few pockets of forest spread throughout Asia, you?ll find tigers. That's enough of a pitch to fight for this animal over the next decade.

A variety of programs and campaigns have been initiated by the government, NGOs and the community to save tigers from extinction.

Driven by a Forest Department sign in Kolkata that encouraged people to contribute to the protection of flora and fauna, Rathindra Das, an enthusiastic biker and wildlife enthusiast, planned to fly across the country to raise awareness.

The West Bengal couple (Rathindra Das and Gitanjali) began a motorbike tour with the intention of sending out a strong message among the people to save the tigers, setting off a movement named "Journey for Tigers."

The power couple started their journey from West Bengal on 15 February and has toured as many as 28 states, including Odisha and five Union territories, to date.

So far, they have made the journey to states such as Assam, Meghalaya, Tripura, Nagaland, Mizoram, Bihar, Uttar Pradesh, Uttarakhand, Himachal Pradesh, Jammu and Kashmir, Punjab, Chandigarh, Delhi, Rajasthan, Gujarat, and others. The couple apparently managed to transmit their message to some 26,000 people, encouraging them to see how critical it is to protect endangered species.

Their main goal of this project was to save remaining tigers and spread the importance among people about the real position of tigers in human life.

Das also claimed that his social cause was supported by media network contacts and a couple of good friends.

Das has also been posing questions about the growing frequency of animal violence in protected areas and claims that the unchecked growth of facilities breach laws and is the key cause of the phenomenon. People decamping to house of worship in the reserve are often contributing to these disputes, he points out.