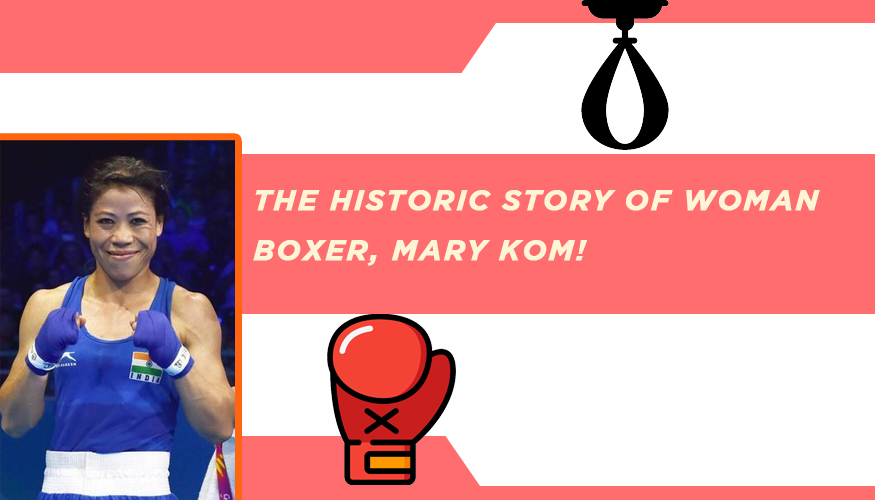 Mary Kom, India's boxing hero, was born in 1983 in Kangathei, Manipur. Mary's life has not been a bed of roses. She has faced many hardships with utmost perseverance to create a name for herself in the arena of world boxing.

Early in her life, Mary completed her primary education from Loktak Christian Model High School, Moirang, and then moved to St. Xavier School, Moirang. She then moved to Adimjati High School, Imphal, for her schooling but couldn't clear her examination. She did not reappear for her exams; instead, she chose to quit her school and pass her examination from NIOS, Imphal, and graduated from Churachandpur College.

She being the eldest among three, helped her parents work in the fields, making charcoal, fishing, and cutting woods. Later, in the evening, she used to spend time looking after her brother and two younger sisters.

Since her childhood, she was interested in sports. Mary took a keen interest in Athletics. She thought she would become a successful athlete and carve a name for herself. But her fate decided otherwise. Mary initially took to sports to provide some financial support to her family.

The success of the famous boxer, Dingko Singh, at the 5th National Games, Manipur, inspired her to become a boxer. Mary began her boxing career in 2000 and was a quick learner. She tried to hide her interest in boxing from her family as it was not considered as a sport for women. Mary's father even scolded her when a photo of her winning the state boxing championship came in the newspaper. However, she continued to pursue her career in boxing. She decided to enter the ring with firm determination and strong will. Mary joined Sports Authority of India, Khuman Lampak and underwent an intensive training from coach and mentor, Shri. Ibomcha Singh to pursue her dream of becoming a world class boxer.

At the age of 18, She made her debut at the first Women World Boxing Championship which was held at Pennsylvania, USA. Mary won a silver medal in the 46kg weight category. A year later, she won the gold at the second Association International de Boxe Amateur (AIBA) World Women's Senior Boxing Championship which was held at Antalya, Turkey. In 2008, Mary came back from her maternity break to clinch her 4th gold in World Championship. She earned the name 'Magnificent Mary.'

She has been honored with the Arjuna Award, the Padma Shri Award, the Rajiv Gandhi Khel Ratna Award and a special award from AIBA. In 2012, Mary created history by becoming the first person from north east to win bronze medal in Olympics.

'Magnificent Mary' is a true inspiration as she overcame struggles and won millions of hearts.