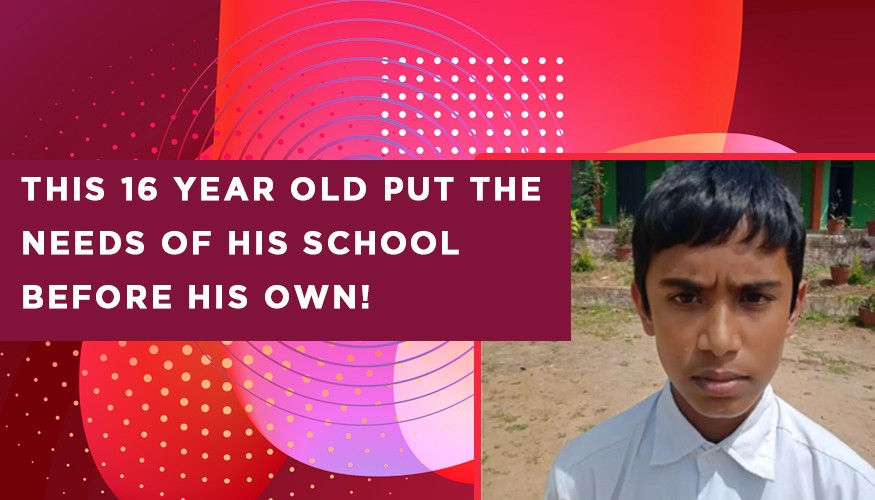 Noble Thoughts Of Karnataka Based Boy On Winning Prize Money Of Rs. 6 Lakhs!

Imagine, one fine day you wake up to a call that invites you to a famous Television Reality Show similar to Kaun Banega Crorepati (KBC). Sounds exciting, right? Now continue to imagine that further during the show you happen to play so well that you win a prize amount of Rs. 6 Lakhs all by yourself! Wonderful! Isn?t it?

Winning an amount that huge is definitely a big deal! If you were a 16-year-old child, what is the first thing you?d do with that money?

Give it to your parents? Put it in your savings account for the future? Live your high-class dreams? Or something else? However, you?ll end up putting yourself and your needs first.

Now come let?s meet KN Tejas, a 16 years old boy (studying in 10th Standard) from Karnataka who actually lived this dream of winning an amount of Rs. 6.4 Lakhs on Kannadada Kotyadhipati, a quiz game show. It was like a dream come true for Tejas.
It was after answering 11 of the 15 questions when Tejas won the bonus amount.

However, keeping his own and family needs aside on winning the amount, he thought of offering his prize to his school, Kattaya Government School in the village to build a concrete fencing around it.

Tejas says that every time the herd would enter the school grounds, the cattle would damage the property as their school had no gate.
Considering the issue, he thought of constructing a concrete fence in his school compound to shield the school from the cattle searching for food from the prize money that he won and saving the leftover money to use for his sister?s wedding and his higher studies. In the future, Tejas would like to become a doctor, he mentioned. This boy who wishes to be a doctor praised his teachers for his achievement.

His act of offering part of the prize money he received on a TV game show to create a structural wall for his school has touched many people's hearts, including Karnataka Minister of Primary and Secondary Education S. Suresh Kumar.

Tejas said that every time the school would plant saplings, the cattle would damage them and so he wanted to help out.

His honorable thoughts generated a stir amongst the government of Karnataka and the Zilla Panchayat. The Minister proposed that he use the money for his studies and instructed officials to create a wall under the Mahatma Gandhi National Rural Employment Guarantee Scheme and immediately a contribution of 20 lakhs was made for the compound building.

The minister, who had heard about the boy from media coverage, thanked him for his commitment and asked his officers to visit his family at his home.

On meeting his family, they discovered that his father Nanjappa was an agricultural worker, and his mother Gowramani works as a mid-day food worker at the government school in Saligrama, K.R. Nagar taluk of the district of Mysore.

Tejas was staying at his aunt's place in Kattaya and his cousin Shanmukha has taken charge of his studies.

Why do you think Tejas must have thought to take this step? Why did he feel to put the need to build the fence around his school before his own needs?

The simple answer to this is that he understood the importance of shielding property while also having greenery around the school.

New findings have shown that greenery in schools allows children to have improved cognitive functions. Even, on school grounds, greenery is required to encourage physical exercise and has a beneficial effect on children's focus.

Plants are needed at schools for students. In reality, few plants can make a huge