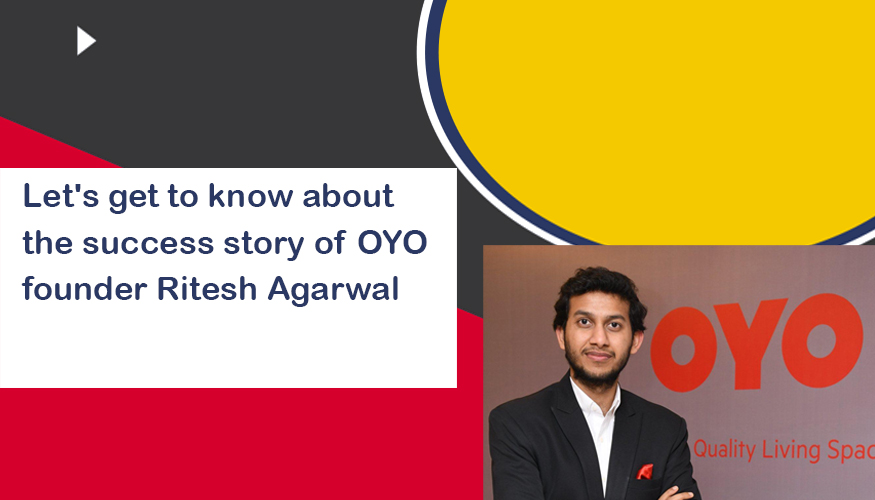 Ritesh Agarwal is the founder and the CEO of OYO rooms, which is a growing network of over 23,000 hotels in more than eight hundred cities in India. This company has a valuation of nearly 360 crore and is said to be one of the next start-up unicorns (A unicorn is a privately held start-up company valued at over $1 billion.) Let us have a look at how the owner of the company built the world?s third largest hotel chain, OYO rooms.

Ritesh Agarwal comes from a simple business class family in Orissa, Cuttack. He was interested in software and programming since a young age. He started practising coding at the mere age of 8! Despite his interests, Ritesh was not the greatest student and he definitely did not feel confident about his studies.

Agarwal moved to Kota in the northern Indian state of Rajasthan soon after finishing his school studies in 2009 to get coaching to enter the prestigious Indian Institute of Technology (IIT.) He would often bore himself in Kota and find himself travelling to nearby Delhi over the weekends.
Shortly after, he managed to write a book called The Encyclopaedia of Indian Engineering Colleges. This book earned him a lot of fame on Flipkart at the age of 17.

At 17, he travelled across India and stayed in more than 100 Bed-and-Breakfasts (B&Bs), guest/vacation houses and hotels. This is when he came to a realization that if he wanted a room at an affordable price, he would get crappy services with a bare minimum standard for a room. If he wanted to get better services, he would have to spend more. Inspiration struck him from here ? he knew he had to build a solution for this.

To narrow down his inspirations:

? He wanted to create a hotel network where people can have standardized rooms with not many add-on services like spa, gym, etc. but rooms that deliver basic standards and high expectations at an almost unbelievable sort of affordable price.

? He knew he had to do something different and innovative because he knew he was a weak student to the extent that he dropped out of engineering college to work on his business.

? A funny side of the motives is that as a kid he wanted to be in control of the TV remote, which he would hardly ever get access to because of his relatives at home.

Ritesh launched a company called Oracle Travels in 2011. He was only 17 at the moment. This company was modelled after Airbnb and could be called as an Indian version of the same.

In 2013, however, he renamed and remerged the company to call it OYO Rooms. It is astonishing to think that he was not even 20 when he found OYO Rooms, which went out to achieve success like never before. He has failed a total of six times to get here. He once mentioned, ?If you have not failed, you have not hardened yourself.?

He faced multiple problems at this venture. OYO rooms, being his second venture was initially achieving slow progress. The VCs initially thought that Ritesh was pitching them an idea of a real-estate business when he asked them for investing and funding his business. This is because something like OYO Rooms had not come into being in India before. However, shortly after, OYO Rooms was a ground-breaking company. He managed to secure a funding of Rs. 30 lakhs from Venture Nursery.

What initially started with just 11 rooms in a Gurgaon hotel has a huge chain of 850,000 rooms, and 46,000 vacation homes, worldwide now.

The forward walk of OYO into progress was difficult. Delivering consistently was a mammoth assignment for them. After they had secured 45,000 rooms spread across 160 urban communities, dealing with a similar arrangement of offices over and over, managing the issues that harvest up, keeping up the 4 star reviews on TripAdvisor and fulfilling the clients on greatest arrangements were an extreme activity which they could oversee effectively with a ton of endeavours.

OYO has managed to have a good business scene in the global market. Ritesh says OYO doesn't have a worldwide contender who will inhale down its direction. So with regards to limiting and money consuming, OYO potentially has minimal measure of consuming thus faces a great financial aspect on its excursion forward.

For a man who has worked tirelessly on OYO Rooms and continues to do so while working 16 hours every day, he is ought to receive praise. Here is a list of awards and recognitions that he has received:

? He was named one of the 8 Hottest Teenage Start Up Founders in the World by Business Insider in 2013.

? He won the Lumis Entrepreneurial Excellence Award in 2014.

? He is the first Asian to win ?20 under 20? Theil Fellowhip, named after Peter Thiel who is the founder and former CEO of PayPal Inc., where the winners are given $100000 over 2 years with appropriate guidance and other resources.

? He was also a finalist of the Global Student Entrepreneurship Awards, India.

Ritesh Agarwal was India?s youngest CEO at the age of 17. He has recently become the world?s second youngest self-made billionaire with his wealth being estimated at $1.1 billion a.k.a. 7,800 crore. Ritesh?s success story continues to teach us that absolutely nothing is impossible!