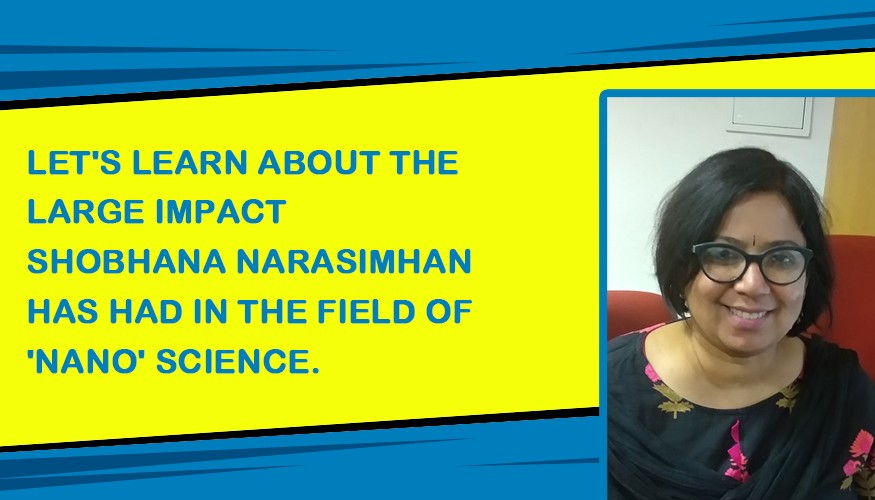 Do you know who Shobhana Narasimhan is? Well! You are about to find out!

Born on August 16, 1963, Prof. Shobhana Narasimhan is a B.Sc graduate from St. Xaviers College, University of Mumbai. She completed her master?s degree in Physics from the Indian Institute of Technology, Bombay. Under the supervision of Prof. David Vanderbilt, she pursued her PhD in Physics at Harvard University. Later, she worked as a postdoctoral researcher, first at Brookhaven National Lab in New York, USA and then at the Fritz Haber Institute of the Max Planck Society in Berlin, Germany. Shobhana.

Narasimhan is from the Theoretical Sciences Unit (TSU) of the Jawaharlal Nehru Center for Advanced Scientific Research (JNCASR). Narasimhan heads the Computational Nanoscience Group at JNCASR. She has been elected as the International Honorary Member of American Academy of Arts and Sciences that recognizes the distinguished work of scholars and leaders in the field of art, science and humanity and public life.

What is the American Academy of Arts and Sciences?

The society was established in 1779 by a group of Harvard College graduates including John Adams, Samuel Adams, John Hancock, and James Bowdoin. On May, 1780 the American Academy of Arts and Sciences, honorary society incorporated in Boston, U.S., for the purpose of nurturing art and science. Its membership includes more than 4,500 fellows in the United States and about 600 foreign honorary fellows. The Academy is classified into the physical sciences, the biological sciences, the social arts & sciences, and the humanities & fine arts. Offices are in Cambridge, Massachusetts.

It evolved largely as a rival to the earlier American Philosophical Society established in Philadelphia in 1743 but ultimately became the larger society, claiming to represent the United States nationally. Its publications include the Bulletin and Daedalus, both issued quarterly. The academy holds a convention each May in Cambridge, conducts various other conferences and seminars, and presents the Emerson-Thoreau Medal, the Amory Prize, the Rumford Prize, the Talcott Parsons Prize, and the American Academy Award for Humanistic Studies.

Shobhana Joins the American Academy of Arts and Sciences

On 1st May 2020, Professor Shobhana Narasimha, head of the Computational Nanoscience group from the Theoretical Science Unit (TSU) at the Jawaharlal Nehru Centre for Advanced Scientific Research (JNCASR), was elected as an International Honorary Member to the American Academy of Arts and Science. JNCASR is an autonomous institute under the Department of Science and Technology of the Government of India. The list of previous International Honorary Members includes Charles Darwin, Albert Einstein and Nelson Mandela.

? Prof. Shobhana Narasimhan worked on the rational design of nanomaterials, examining how the lowering of dimensionality and reduction of size affects material properties.

? She actively promotes the women in STEM in India and abroad. And has been co-organizing Career Development Workshops for Women in Physics since 2013 at the Abdus Salam International Centre for Theoretical Physics (ICTP), Trieste, Italy and ICTP-EAIFR, Kigali, Rwanda. These workshops provide women in physics (primarily from the developing world) a space in which to share their experiences and also to acquire skills that will help them rise in their careers.

? Her group predicted that the morphology and reactivity of gold nanoparticles deposited on oxide substrates can be tuned by doping the support with electron donors or acceptors.

? Her work is relevant for a number of different applications, such as Nano - catalysts for clean energy applications and magnetic materials for memory storage.

? She became a fellow of National Academy of Sciences, India in 2011.

? She won the Stree Shakti Samman Science Award in 2010 and the Kalpana Chawla Women Scientist Award of the Government of Karnataka in 2010.

Shobhana has been involved with the Quantum ESPRESSO group as well as ASESMA (African School for Electronic Structure Methods and Applications) in teaching solid state physics and Density Functional Theory. This spanned over a 1-2 week long workshops in Asia and Africa. She found it immensely rewarding to be met with such enthusiasm even though she taught for a short period.

She advises budding scientists in the nanoscience field to try to sit back and look at their work from a distance. Ironically, she suggests looking at the 'Big' picture for 'nano' science: ask the big questions, asking the little questions may raise your h-index but won't necessarily enable you to make the big breakthroughs! This is true for all science not just nanoscience.