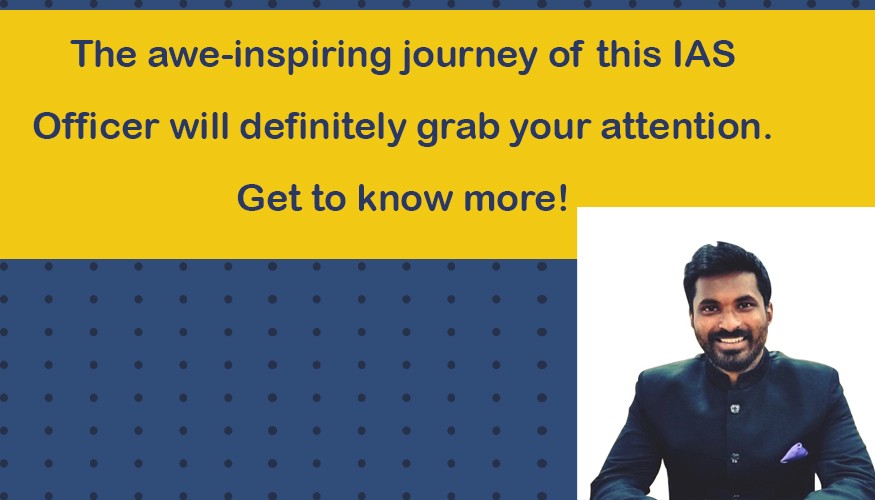 Hey Students, do you like reading about people who despite facing several hurdles went on to follow their dreams and accomplished great things? Then this is the inspirational success story for you.

Defying stereotypes and overcoming social obstacles, is one such man, named Naveen Chandra an Indian Administrative Service (IAS) officer. IAS is considered as a prestigious role in our country as it is one of the arms of the All India Services but is a tough nut to crack. The story of this Ghaziabad boy who scored an All India Rank of 490 in the Civil Service Examination (CSE) 2017 is set to inspire and motivate you to etch your own success story.

It's Never Too Late To Pursue Your Dreams

As a young child, becoming an IAS officer was all that Naveen dreamt of. But that dream was left behind when he enrolled in science during college and later graduated in Chemical Engineering from IIT Roorkee in 2015. During the phase of campus interviews, something inside him made him question if he wanted to pursue engineering. Coming from a lower-middle-class family of five members - father, mother, and two younger sisters, his father the only breadwinner, worked hard to educate them. It was on his father's suggestion and support that Naveen reflected on his true passion and decided to follow his childhood dream.

Success Is A Journey, Not A Destination

The IAS journey of Naveen replicates how discipline is that magical key to the doorway of your dreams. Naveen has successfully passed two consecutive exams, the Union Public Service Commission (UPSC) and Civil Services Examination (CSE) in 2016 and got into the Indian Railway Personnel Service (IRPS) in 2017, later entering the IAS.

Naveen shares his rigorous exam preparation schedule with aspirants to help them achieve their dreams.

Time Isn't The Main Thing. It's The Only Thing

While preparing for his exam he observed and followed several toppers and successful people and found one thing in common. Each of these people had a time-table. Naveen too charted 3 time-tables for himself- monthly, daily, and weekly to complete an enormous syllabus. As he believes that without a time-table a person is directionless and will not be able to utilize his day productively nor be able to complete set targets.

He also jotted a list of things to avoid as he preferred being safe than sorry. Before Naveen began studying for UPSC, he laid down strict rules for himself and followed them diligently. He deleted all his social media accounts, as keeping a tab on other people's life is a very strong tendency of humans, hence no matter how much you keep yourself away from it you will end up opening and checking these accounts. So it is best to uproot it from the source, not deactivate but delete it. As social media isn't going anywhere and you can create your accounts later. He also stopped attending calls from unknown numbers, avoided going out for family functions, and limited his meeting with friends.

Exams can take a toll on a student's health, hence he suggests to never neglect your physical and mental health. Health should always be your topmost priority. Naveen loved playing football during school and college days but this option was not compatible with his exam preparation schedule. So to stay fit he joined a gym and worked out six days a week for an hour.

Having a hobby is very important to help students de-stress from exam pressure. Naveen likes reading and he read a lot of books apart from his syllabus during his exam preparation. He suggests young aspirants to develop a hobby, be it playing the guitar or learning a new language.

Spending quality time with family and friends is very crucial, as they are the ones who will always be your guide and support. Naveen's refresher break did not include spending hours on calls with friends but taking out a timely five-minute break from studies to connect with his family.

Self Motivation Is The Key

After following all steps and schedules yet a person can lack the motivation, to which Naveen suggests always to remind yourself of the reason you began studying. We can often feel disappointed when we consistently fail to achieve our goals. Surely Naveen has had his highs and lows, but to still stick to the path you once began your journey on is the secret to success.

Naveen is passionate about helping the underprivileged and marginalized. He is currently posted as an Assistant Collector and Magistrate at Malda district, West Bengal, and is working on two projects in the education sector, Project Magic, where he teaches computer programming skills to girl students in government schools to enable them to get a better livelihood and to help them fight child marriage. Another is Maldacademy, a UPSC CSE guidance initiative by officers posted at Malda. Naveen is also very actively involved in spreading mental health awareness.

The great achievement will never come served to you on a platter with a silver spoon in it. You have to work on it, work for it, and work towards it. What we become in life is the outcome of what process we go through and what path we chose. Naveen achieved his Dreams with Determination, Dedication and Devotion- you can achieve your Dreams too!