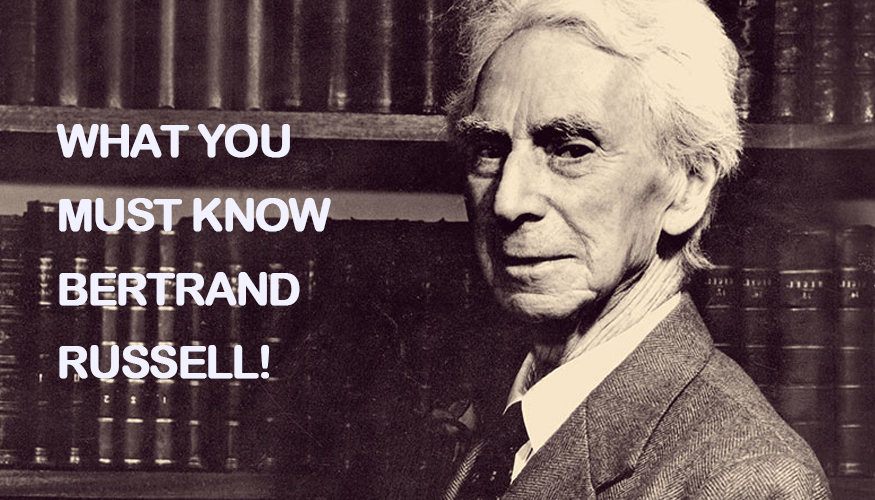 The Greatest Pacifist-Nobel Laureate: Bertrand Russell, Find Out His Story!

Bertrand Arthur William Russell was one of the greatest philosophers, mathematicians, humanists and logicians of the 20th century. He was regarded by millions of people across the world as a prophet.

Bertrand Russell disliked studies and more so hated maths and algebra with a vengeance. He however, liked poetry and studied philosophy and logic at Cambridge University in the year 1890. For all his dislike for education, he excelled in Greek and Latin languages besides Italian, French, German, and of course, English; he was a multi linguist.

Bertrand Russell was an unconventional man who did not understand the art of diplomatic speech. He was totally outspoken and shocked the conservatives.

After his removal from Trinity College, Bertrand Russell supported himself by writing popular books on physics, ethics and education. He also established an experimental school in 1927 called Beacon Hill School which allowed maximum freedom to children with hardly any restrictions on their behaviour and expressions. While setting up the school, he announced that he would allow the children to be free and not bind them by any rules and regulations. Bertrand Russell?s free revolutionary method failed miserably. This experimental school refused to take off. It faced many financial problems and became a school for problematic children. Expelled indiscipline students from conventional schools found admission in this establishment. Bertrand Russell was heartbroken and disappointed by his good intention going sour. Vexed, he disassociated himself completely from this school. This was one more setback in his life which he tried to overcome.

In the 1930s? he earned his living by writing books and published many of his works including the famous

In the spring of 1939, he went to America and gave lectures at Santa Barbara, University of California and Los Angeles. Very soon he was appointed as a professor at the City College, New York.

He was not received very well in the US. There was quite a lot of public criticism on his appointment at the Trinity College. His radical views on religion, morals, ethics and politics did not find favour with the Americans. Soon enough, he was declared morally unfit to teach at the City College, New York.

Disappointed, Bertrand Russell returned to England in 1944. Fortunately, he had the good opportunity to join his old faculty at Trinity College. There he slowly regained his name and fame and was once again admired and revered by one and all. It was during this time he wrote his 3-volume autobiography. With his rising popularity, he regained his old zest for philosophical thinking. In the winter of 1948, BBC invited him to deliver lectures on Authority and the Individual. Finally in June 1949, he was awarded the Order of Merit and later he was conferred with a Nobel Prize for literature in the year 1950. The Nobel Prize was in recognition for his varied and significant writings in which he champions humanitarian ideals and freedom of thought.

Today, we all know Bertrand Russell as the founder of British Analytical Philosophy; a renowned name in mathematical logic. His most significant work was his Principia Mathematics. In mathematical logic, he established Russell?s paradox which led to the creation of modern axiomatic set theory. His theory of descriptions was a significant contribution to philosophy of language.

Bertrand Russell became famous as a pacifist and a radical social critic. He launched a campaign for nuclear disarmament. He urged the British Government to take initiative in reducing the nuclear threat across the world and to reduce armament race. He was considered as a crusader against nuclear madness. He emerged as the greatest pacifist leader of the world.

He lived a controversial life and a career dotted with twists and turns. But the fact remains that he will always remain as the greatest pacifist of this modern world.