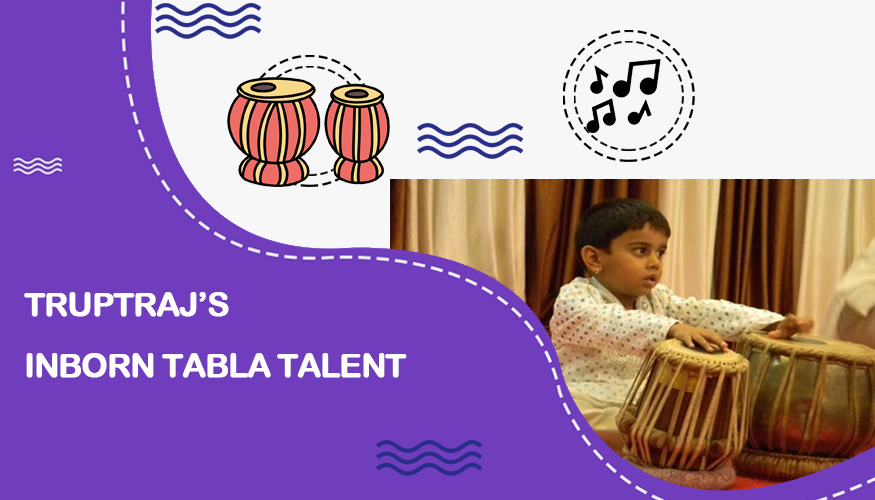 Truptraj Pandya is, without a doubt, a born musician! Toys are a crucial part of every child's growing up, and so Pandya's mother bought a Dholki to play. And lo and behold! the family was mesmerized to see their young one getting the rhythms right. Isn't this Surprising! Early in his childhood, when his grandmom sang Bhajans and devotional songs, he would pick up any utensil from the kitchen and try to catch up with the beat and rhythm. His family was overwhelmed and surprised by this little one's skills, and the music lovers were awestruck by him.

Pandya's parents started on his Tabla classes, when he was one and a half years. He was attentive whenever classical/ instrumental music was played, and he enjoyed listening to it. For a one and a half-year-old playing, techniques are not easy as it involves extensive use of fingers and palms. However, this little one had no problems at all, and not much teaching was required. His Guru was highly impressed with his skills and he proclaimed that such talent is rare to find.

Pandya at the age of 2-years-old gave his first big performance at Somaiya College, Mumbai. Before this, he used to practice and perform for his family and friends at home and his school, as well. Later, when people came to know about his unique talent, he was invited to perform at weddings and events.

This little genius has received Bal Kala Ratna Award by All India Radio. He made his entry as the youngest professional Tabla artist in the Guinness Book of World Records when he was 7-year-old. However, he was asked to wait until he is 12-years-old to be in the Limca Book of Records as entries are not accepted for kids below 12.

After making his mark at the Guinness Book, Pandya has been performing endlessly and mastering his skills. Ustad Zakir Hussain, Pandit Hariprasad Chaurasiya, and Ustad Iqbal Ahmed Khan have bestowed their blessings on him and have been helping Truptraj get better with his skills.

The credit of the little one displaying such marvellous talent goes to his parents, who saw and encouraged his talent in the right direction. This little one is an inspiration to many young kids out there.