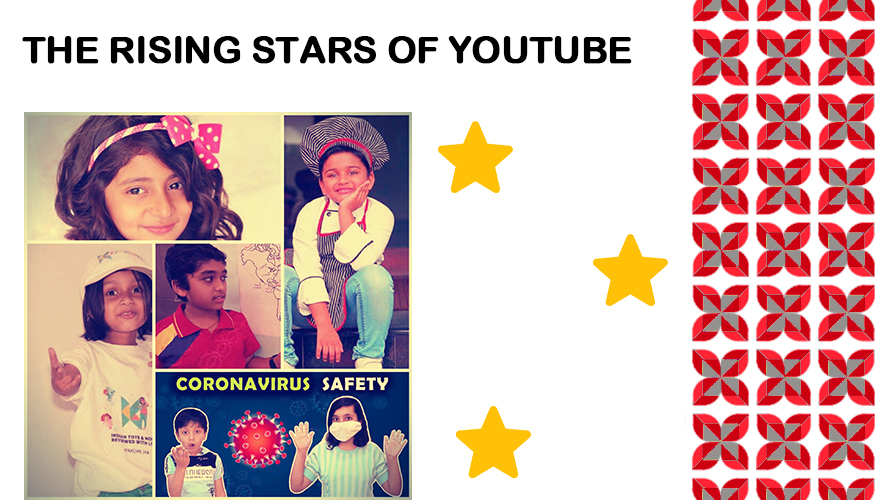 YouTube is a video streaming site and it has now become a platform for people, young and old, to display and put forward their videos and earn fame and money. It allows individuals to put forth their ideas through a video and can be viewed by anyone around the world. A lot of individuals have benefitted from this website, and some of them are these five young superstars.

Nihal?s YouTube channel is called KichaTube HD. It is a fun cooking channel where Nihal tries out his different recipes teaching the viewers how to make those dishes. Watching the chef will surely bring a smile to your face. Nihal has also been on the American TV show ? The Ellen Degenres Show?, where he taught Ellen how to make the traditional south Indian breakfast ? puttu. Kicha says he was inspired by EvanTube HD, and wants to continuing running a channel as he loves to cook and eat.

Anantya runs a YouTube channel called MyMissAnand. Anantya?s mother and aunt also make YouTube videos, and hence she was inspired to start one of her own. She started off with DIY videos but now makes short skits. Watching her videos will surely make one cackle. Her channel now has over 4.53 millions subscribers.

Kyra is a young YouTube star who runs a YouTube channel called Kyrascope Toy Reviews. She makes unboxing videos, where toy boxes are opened and she reviews the toys. Her father says that she loves and enjoys making such videos. Her channel currently has over 12.5 thousand subscribers.

Aayu and Pihu are siblings who are starts of the YouTube channel The Aayu and Pihu Show. The channel is run by their parents who help the kids with the scripts, lighting, and managing the shoots. The kids take part in various challenges while their mother hosts. The channel currently has over 3.93 million subscribers and is growing.

Amar runs a YouTube channel called Learn with Amar, where he uses a visual method of teaching his viewers about countries, topography and overall geography. It?s an incredible channel that makes learning of geography fun and easy for students of all ages. He has over 291 thousand subscribers.

These young YouTube stars have managed to showcase their creativity and talent through this platform, while at the same time earn lots of money