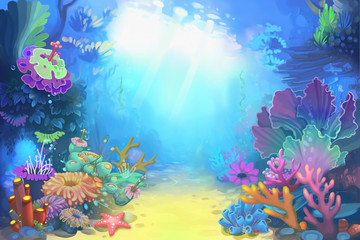 Ocean makes up for 70 percent of the Earth?s surface. On 8th June, the world celebrates World?s Ocean Day. Despite this, there is little information available about the mysterious blue sea.

Mariana Trench, which is the known deepest part of the ocean, has been ventured on only twice. It is roughly 11 kilometers deep. The various deep-sea expeditions have thrown light on the fact that life can exist even in the most extreme adverse conditions. Scientists are now working hard to uncover the deep abyss in the oceans for uncovering various mysteries lurking in the depth.

Various under-sea explorations have discovered various shocking facts. For example, the world?s largest waterfall is not Angel Falls (979 m) but is found under the ocean floor. A 3.5 km tall waterfall has been discovered beneath the Denmark Strait separating Greenland and Iceland.

Even various lakes and pools, known as brine pools, have been discovered on the ocean floor. Due to high salt content, the water does not mix. Violent volcanic eruptions have been uncovered under the ocean.

Hydrates are formed under water, which leads to another area of study known as deep sea chemistry. The ocean is too deep to be fully deciphered. But with time, more advancements would take place which would be able to shed more light on the subject.

LIFE FORMS PRESENT AT THE BOTTOM OF THE OCEAN

Extremophiles have been discovered by the scientists, which are exotic creatures, thriving on the ocean floor. Ocean floor is one place where scientists could not think about the possibility of life owing to lack of sunlight and presence of extreme pressure.

The gigantic tubeworms, which are gangly white and red creatures, can be found in the deep ocean. These live in bunches several miles deep and can grow to 2.4 meters long. These can survive even under extremely high levels of sulfur and at extremely high temperature. The mystery lies in deciphering the way they manage to do so.

Scientists could also uncover some deep-sea colonies of shrimps that remain unaffected despite the harsh conditions prevalent in the ocean floor. The marine life has its own rich diversity, which is now being discovered by the scientists. See-through cucumbers, species of octopus and yeti crabs are some of other species that have been discovered.