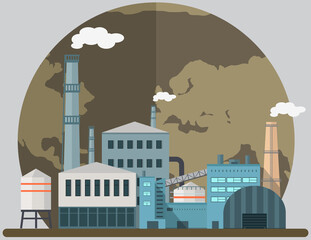 Harmful Effects Of Industrial Pollution On Human And Wildlife!

Mercury is a toxic heavy metal that is widely dispersed in nature. Most human exposure results from fish consumption or dental amalgam. Mercury occurs in several chemical forms, with complex pharmacokinetics. Mercury is capable of inducing a wide range of clinical presentations. The diagnosis of mercury toxicity can be challenging but can be obtained with reasonable reliability. Effective therapies for clinical toxicity have been described.

Mercury is a heavy metal of known toxicity, noted for inducing public health disasters in Minamata Bay, Japan and in Iraq. The clinical impact of smaller mercury exposures remains controversial. It exists in several forms: inorganic mercury, which includes metallic mercury and mercury vapor (Hg0) and mercurous (Hg2?++) or mercuric (Hg++) salts; and organic mercury, which includes compounds in which mercury is bonded to a structure containing carbon atoms (methyl, ethyl, phenyl, or similar groups). The biological behavior, pharmacokinetics, and clinical significance of the various forms of mercury vary with chemical structure. There is some interconversion in vivo between the various forms of mercury. Inhaled elemental mercury vapor, for example, is easily absorbed through mucous membranes and the lung and rapidly oxidized to other forms (but not so quickly as to prevent considerable deposition of elemental mercury in the brain). Methyl mercury is easily absorbed through the gut and deposits in many tissues, but does not cross the blood-brain barrier as efficiently as elemental mercury; however, on entering the brain it is progressively demethylated to elemental mercury. Mercury salts, in contrast, tend to be insoluble, relatively stable, and poorly absorbed.

Most human exposure to mercury is caused by outgassing of mercury from dental amalgam, ingestion of contaminated fish, or occupational exposure, according to the World Health Organization.

Mercury exists in nature primarily as elemental mercury or as sulfide and is found in the earth?s crust at approximately 0.5 parts per million. Atmospheric exposures occur from outgassing from rock or through volcanic activity. Human sources of atmospheric mercury include coal-burning [9] and mining (mercury and gold in particular). Atmospheric elemental mercury settles in water, where it is converted by microorganisms into organic (methyl or ethyl) mercury, which is ingested by smaller creatures that are eventually consumed by larger fish. Fish at the top of the food chain (e.g., tuna, swordfish, or shark) may concentrate considerable mercury in their tissues.

Effects on humans and wildlife

When mercury is deposited in lakes or waterways, bacteria convert it to methyl mercury. Methyl mercury accumulates in algae and is eaten by smaller fish, which in turn are eaten by larger fish. Fish at the top of the aquatic food chain, such as walleye, can have methyl mercury concentrations as high as 130,000 times that of the surrounding water.

Unfortunately, the mercury in fish also concentrates in the tissue of any human or wildlife eating the fish. If contaminated fish are eaten on a regular basis, mercury concentrations can become high enough to become a serious health threat to humans. Several Great Lakes states issue advisories each year, cautioning people to limit the amount of fish they eat from area lakes.

Mercury gets into lakes from the atmosphere, where it falls with rain or snow into the watersheds that feed the lakes. Approximately one gram of mercury enters a 20-acre lake each year. Over time, just this small amount can contaminate the fish in that lake, making them unfit to eat on a regular basis.

Each of us must do our part to keep mercury out of the environment. Make sure you buy mercury-free products whenever you can, such as mercury-free thermometers, heating/cooling thermostats, other types of switches and relays, and barometers and manometers. Make sure that you recycle mercury-containing products and bulk mercury; households can contact the local household hazardous waste collection program.

A few products require mercury to function, such as fluorescent and high-intensity-discharge lighting. These lights are still good choices environmentally and economically because they are highly energy-efficient, which means they require less power generated by coal-burning power plants that release large amounts of mercury into the atmosphere. By using and then recycling these items properly, we can minimize overall releases of mercury to the environment from human activities.

Efforts by manufacturers of mercury-containing products, government programs, and solid waste management facilities have significantly reduced mercury entering the environment from products that contain it. For example, Hennepin County programs to keep mercury out of the waste stream, together with pollution control equipment on the county's waste-to-energy plant, have brought mercury emission levels down from 496 pounds in 1990 to less than 21 pounds in 2000, a reduction of over 95%.