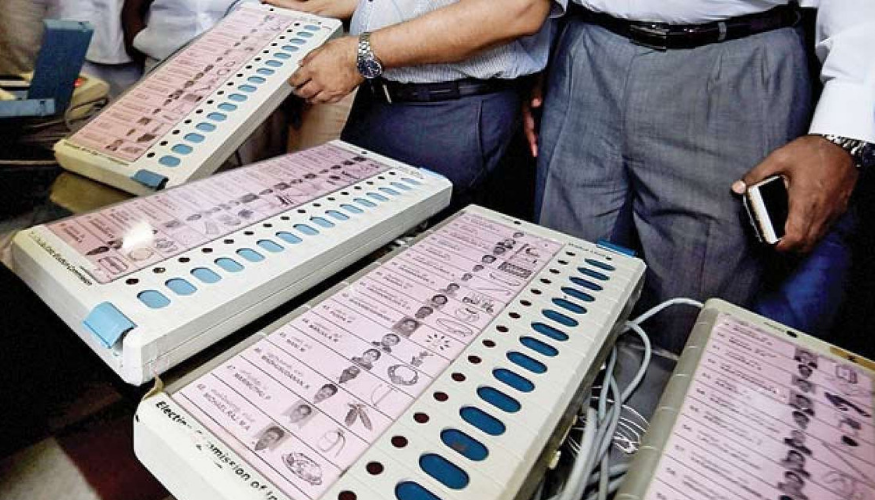 Interesting! Check Out How Does An EVM Collects Votes For Thousands Of People In Indian Elections

The electronic voting machine is called as EVM. Unlike the traditional ballot boxes, EVM is faster, accurate and safer! EVM is the technology that helps a democracy of 1.36 billion people to choose their leader!

What is an EVM?

EVMs or electronic voting machines is a device which has a unique button for each political party. Each choice of the voter is recorded corresponding to a beep sound to confirm the vote. The EVM machine prints a ballot that is Voters Verifiable Paper Audit Trail (VVPAT) and automatically adds it to the collection box. EVM panel displays the total number of votes recorded from the EVM chip that stores the electronic data.

How did voting machines evolve to EVM?

Till the year 1982 only ballot papers and ballot boxes were allowed for the voting process. In 1982 Kerala General Assembly Elections EVM was used for the first time. Today voting happens only through EVM for Indian General and State Elections as per the guidelines of Election Commission of India.

How do EVM?s and polling process work?

An EVM consists of a control unit and a balloting unit. A control unit ensures that one person gets to vote only once. When a voter presses a button the machine locks itself. After this EVM can be opened only with a new ballot number. The two units are connected by a five-meter cable.

Before polling, the presiding officers conduct mock polls in front of political party representatives to ensure the EVM is free from all manipulation.

While polling, upon furnishing ID proof, the officials will verify it documents against the electoral rolls. Verified candidates get indelible ink mark on the finger. The voter can proceed to cast their votes on the EVM. Once the vote is cast, a red light will glow next to the button he/she pressed, following which a VVPAT will show up on the machine kept next to the EVM for 7 seconds.

In case of any mismatch between the vote cast and the VVPAT, the voter can approach the presiding officer and lodge a complaint.

What are the advantages of EVM?

? EVMs reduce the time-consuming process of in casting and evaluating ballot votes

? Tampering with votes is not possible with a well-supervised EVM booth EVMs restrict 5 votes for every minute thus reducing the chances of the incessant number of multiple votes

? EVMs save paper and is cost-effective

? Battery Powered EVM?s can be used in rural areas where electricity doesn't reach

? EVMs can accommodate 64 candidates in a single constituency

? Votes cannot be rigged as any attempt to rig the votes will lead to breaking down of the system

? Only one vote can be cast per person as the machine will register only the first button pressed

? Votes can be stored for up to 10 years

Indian Producers and Designers of EVM:

There are only two Indian Public Sector Units (PSUs) that manufacture EVM machines:

The secret source code is only accessible to a few engineers who have worked on the make and system engineering. Engineers who are in the factory have no clue about which machine will be sent to which constituency.

You can take up the degree of Electronics Engineering from any AICTE or UGC approved educational institute that offers this program. Electronic engineers typically do the following:

?They Analyze customer needs and determine the requirements, capacity, and cost for developing that component, software, product, or system

Research Institutes that have worked on EVM technology and its aspects:

Netindia, (P) Ltd., Hyderabad and The University of Michigan