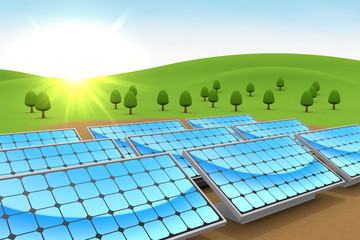 A growing number of farms and agricultural businesses are looking to solar to power their daily operations. Thanks in part to the Solar Energy Technologies Office's investments, the cost of going solar has declined, enabling more installations across the country. Consider these questions to help you determine what?s best for you and your farm.

Silicon-based PV cells are the most widespread solar photovoltaic technology used. Most solar panels have a glass front that protects the PV cell and an aluminum or steel frame. Research shows that ?leaching of trace metals from modules is unlikely to present a significant risk due to the sealed nature of the installed cells.?

Some solar modules use cadmium telluride (CdTe). Cadmium compounds are toxic, but studies show that such compounds cannot be emitted from CdTe modules during normal operation or even during fires. Industrial incineration temperatures, which are much higher than grassfires, are required to release the compounds from the modules.

There have been relatively few studies on microclimate effects under solar modules, but current research results show there is little to no average impact. Air temperatures tend to be cooler under the panels during the day and warmer under the panels at night. One study found that air temperature, humidity, and crop temperature under modules was similar to conditions of full sun. This study found that soil temperatures at night under the modules was less than that of soil temperatures in full sun all day. There have been no studies linking solar development with pest problems, but studies have shown how native plants can thrive underneath solar installations.

Solar modules create an opportunity for avian interactions. PV modules are generally less reflective than windows and have been installed and monitored for avian impacts at numerous airports. Nonetheless, avian injuries and mortalities may occur through collisions with power lines, vehicles, fencing, and solar equipment and structures such as modules. There are some concerns that birds might misconstrue solar installations for bodies of water and attempt to land on them, but this has not been proven. A 2017 comprehensive survey of all solar and bird interactions in the UK determined that ?bird collision risk from solar panels is very low. There is likely to be more of a collision risk to birds presented by infrastructure associated with solar PV developments, such as overhead power lines.?

Solar modules require the use of other electrical equipment, such as inverters and connection boxes, which emit some noise. The frequency of most inverters is 50-60 Hz, the same as AC electricity in your home or commercial building, which is within the range audible to humans and well below the higher frequencies used to repel animals. Sound is generally not audible at the edge of the fenced boundary, but if audible, the sound is similar in volume to background noises and dissipates to inaudible 50 ? 150 feet from the edge of the boundary. A combine harvester made for India?s small farms Colorado State University precision farming expert, Raj Khosla, was on one of his frequent trips to India last December when an odd piece of roadside farm equipment caught his eye. The machine was clearly a combine, but sitting on top of it was a tractor.

?I said ?What the heck is that??? laughs Khosla, who has conducted more than a dozen precision agriculture workshops across India during the last five years. ?It was funny and amazing, and I was really intrigued.?

It turns out the machine was a ?tractor-mounted? or ?tractor-driven? combine, and it?s becoming more and more popular in India. The combine is compact, for one, making it suitable for Indian farm fields that typically range in size from just 0.5 to 10 acres. And the tractor is easily taken down at harvest?s end (it?s hoisted on and off the combine with a small crane), allowing farmers to use it in other field operations during the rest of the year.

?What they?re doing is increasing the efficiency of the equipment they have on the farm, by having multiple uses of the same machinery,? Khosla says.

Most importantly, harvesting in India has traditionally required landowners to find, hire, and retain 40 or more workers during the month-long harvest, and this has gotten much harder to do in recent years as people migrate from India?s countryside to its cities, says M.B. Patil, a collaborator of Khosla?s at the University of Agricultural Sciences (UAS), Raichur, in the southern Indian state of Karnataka.

Not only does a combine harvester help farmers contend with the growing labor shortage, explains the UAS plant pathologist, but it can also save them money. Local pigeon pea-, sunflower-, and wheat-farmers, for example, will rent the services of a tractor-driven combine for 2,000 rupees ($40 U.S. dollars) per acre?about half of what they?d pay to employ laborers to bring in the harvest.

UAS, Raichur, owns two tractor-driven combines at present, and Patil estimates that about 600 more are now in operation across Karnataka. While the machines are still expensive for many Indian farmers to purchase?they typically cost 23 to 25 lakh rupees or $46,000 to $48,000 in U.S. dollars?the state government will subsidize 30 to 40% of the price. And those who can afford to buy machinery typically share it by offering services to other farmers.

OXAMII, a startup based in Adelaide, South Australia, has developed a system to make it easier for owners of solar arrays producing a minimum of 200 kilowatts to sell power on the spot market.

Founders Aaron Yew, Luke Marshall, and Ray Carclaw have secured a number of investors for the online platform and plan to launch before July.

Yew said their aim was to allow customers to be more connected to their energy supplier, such as a farmer with a large solar array.

Their platform connects buyers and purchasers by making Oxamii the agent that monitors energy flows, calculates bills and manages loads for its customers.

Climate change is an issue that is already affecting every person on earth, and the effects will only compound with time unless drastic solutions are taken. In the face of these growing challenges of climate change and rising global temperatures, it?s wiser to move towards adopting renewable energy. The younger generation needs to recognize that they have the ability to make substantial changes... If students as young as fifth grade can see the importance of fighting for the environment?s future then the world will be more sustainable for generations to come.

To mobilize youth in the movement to use clean energy and make life on our planet more sustainable, SUN Foundation conducts unique solar clinics program and sensitizes the younger generation on climate change and enumerates ways by which the youth can play a role in negating the ill-effects of global warming. Through these sessions, we want students to make a difference where they can, by campaigning in schools, housing societies, and their parent?s workplaces ? not just to adopt solar rooftops as a lifestyle choice but also to become advocates of green energy.

If agriculture is to continue to feed the world, it needs to become more like manufacturing, says Geoffrey Carr. Fortunately, that is already beginning to happen

TOM ROGERS is an almond farmer in Madera County, in California?s Central Valley. Almonds are delicious and nutritious. They are also lucrative. Californian farmers, who between them grow 80% of the world?s supply of these nuts, earn $11 billion from doing so. But almonds are thirsty. A calculation by a pair of Dutch researchers six years ago suggested that growing a single one of them consumes around a gallon of water. This is merely an American gallon of 3.8 liters, not an imperial one of 4.5 liters, but it is still a tidy amount of H2O. And water has to be paid for.

Technology, however, has come to Mr. Rogers?s aid. His farm is wired up like a lab rat. Or, to be more accurate, it is wirelessed up. Moisture sensors planted throughout the nut groves keep track of what is going on in the soil. They send their results to a computer in the cloud (the network of servers that does an increasing amount of the world?s heavy-duty computing) to be crunched. The results are passed back to the farm?s irrigation system?a grid of drip tapes (hoses with holes punched in them) that are filled by pumps.

The world human population is already more than 7 billion ? a number that could exceed 11 billion by 2100, according to projections from the United Nations. This rising populace, coupled with environmental challenges, puts even greater pressure on already strained energy resources. Granted, there?s no silver bullet, but Georgia Tech researchers are developing a broad range of technologies to make power more abundant, efficient, and eco-friendly.

HOW YOUNG FARMERS IN INDIA ARE APPROACHING AGRICULTURE AS BUSINESS

Family farms in Karnataka get a boost through TechnoServe's partnership with Cargill to support skill development of rural youth. Maruthi S. is the son of a small farmer from village Bhanuvalli in Davangere district, Karnataka state in India. After completing high school, Maruthi started work on his family farm, assisting his father in the farming of paddy and betel vine. Until recently, they had earned their living only from farming; but now Maruthi has new opportunities.

Thanks to the Cargill Agri Fellow program, 18-year-old Maruthi has gained skills to improve the productivity of his family farm, and to start his own commercial farming ventures.

?With the support of Cargill and TechnoServe I got an opportunity to learn modern agricultural practices,? said Maruthi.

Maruthi is one of the 14 youths who had been chosen for the first cohort of the Cargill Agri Fellow (CAF) program. The program, which launched in April 2016, helps to address employability and skills gap among the youth of Davangere while stimulating the development of the region?s agribusiness sector.

?I have started to see agriculture as my business venture and I want to work hard to make a success out of it.?

As part of the program, Maruthi received one month of classroom training at the University of Agricultural Sciences (UAS) in Dharwad, learning about best practices for growing the region?s major crops, such as rice, maize, and sugarcane. The training covered a broad range of topics: dairy, poultry, fish and farming; mushroom cultivation; organic farming; commercial horticulture; and even silk farming.

After completing the course at UAS, Maruthi returned to his family farm and established four vermicomposting units, using a banana leaf from the farm and worms to produce low-cost compost. Based on his training, he applied seed treatment for his paddy crops and treatment for the betel vine to prevent fungal disease. He has also approached the TechnoServe team to guide him in setting up a drip irrigation system on his farm.

Optimistic about the future, Maruthi now plans to start his own commercial dairy farm and expand his vermicomposting operations. He is better equipped to support his family and contribute to the family?s savings. ?I have started to see agriculture as my business venture and I want to work hard to make a success out of it.?

The Agri Fellow Program is one of the components of Saathi, a four-year local economic development project being implemented by TechnoServe in partnership with Cargill. Saathi ? which means friend or companion in Hindi ? aims to help 5,000 smallholder farming households in the Davangere improve their livelihoods. In addition to promoting livelihood opportunities for youth, Saathi will focus on agriculture development and diversification and economic empowerment opportunities for women. Saathi also includes community programs such as infrastructure support, toilet renovation, and providing learning materials for the local schools.