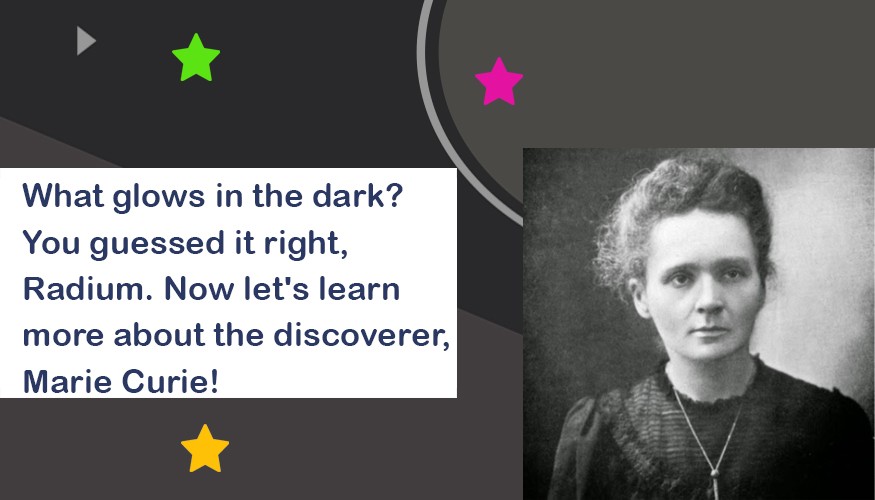 Her research in the subjects of physics and chemistry and the discovery of the substances, ?polonium? and ?radium? with her husband, Pierre Curie is what she is most famous for. Let us learn a bit about her history and her discoveries.

Marie Curie (Maiden name: Marie Sklodowska) was born in Warsaw, Poland in 1867. During her schooling days, Poland was under strict Russian rule because of the January Uprising, a war that was waged in opposition to the Russian rule by Poles in 1863-1864. These led to all of her classes being taught in the Russian language. All the teachers were Russian. The school environment felt like one with zero liberty where the students constantly feared that they were being spied on by their teachers and hence did not converse in Polish. They thought they might be putting themselves and their families in danger by doing so.

Despite these circumstances, she passed her school with top grades. From a young age, she had developed a curiosity for maths and physics. We can understand where this zeal comes from- both her parents were teachers themselves. Her father, Wladyslaw Sklodowski taught her maths and physics, which she found were extremely easy.

After completing her schooling, at the age of 17, Marie started taking tuitions. She took up home-schooling jobs for children of the proprietors. She even started teaching other children from villages because she knew that the education under the Russian rule was not adequate. Teaching was her day-job. In the night, she would study in secret with the hope of getting to study abroad someday since the university in Poland did not accept women.

In 1891, when Marie was 24, she left Poland to go to Paris, France for further studies. She knew there was no scope in the Poland University for her; hence she travelled to France to study physics and chemistry in Sorbonne University of Paris. She left Poland at a time when it was not even on the map of Europe.

Her goal was simple ? getting a teacher?s diploma and returning to Poland. However, this goal changed eventually as she ended up staying in France. She met a French scientist named Pierre Curie in Paris. They were work associates and shortly after he proposed for marriage. Initially, she was hesitant since she knew that this would mean separation from her family and homeland. She was extremely nationalistic and loved her nation dearly since a very young age. She did eventually get married to Pierre in July, 1895. Both of them proceeded to do ground-breaking research and her accomplishments got Poland the attention.

Her Work and Discoveries

Marie and Pierre, both being physicists and chemists, devoted their lives to researching. In July 1896, they found a new substance, which they named Polonium. It was named Polonium as a tribute to Marie?s homeland, Poland. By naming this newly discovered atomic element which was going to make history, in her country?s honour, she wanted to let the world know about Poland?s lack of independence as a sovereign nation. Shortly after, they found another advanced element and called it Radium. These two discoveries are the best discoveries she had made and were the ones she was most known for.

During the time of World War I, she made special vehicles which would act as mobile X-ray machines. These helped to x-ray all sorts of fractured bones that the French soldiers might have, right on the front. Many a times, Marie would drive these vehicles herself. In fact, Marie was one of the very first women to have a driver?s licence.

In 1932, she opened two institutes and named them ?Radium Institute.? One was opened in Paris and the other was opened in Poland. She saw to it that there was a certain number of Polish staff in the institute in Paris because she wanted Polish people to succeed. The Radium Institute provided one of the finest, most advanced facilities that specialized in cancer treatment.

? She discovered that a person can exactly measure the strength of the radiation from uranium.

? She explained to the world how the intensity of the radiation is proportional to the amount of uranium or thorium in the compound ? no matter what the compound might be.

? She studied and learnt that the ability to emit radiation does not depend on the arrangement of the atoms in a molecule and that it must be linked to the interior of the atom itself. This is considered as a revolutionary discovery.

Marie Curie was not only the first woman scientist to have won a Nobel Prize, but also the first ever person to have won 2 Nobel Prizes. The first Nobel Prize that she won was in May 1932. Marie and Pierre collectively earned the Nobel for their research on the radiation phenomena. Here is a list of awards that Marie won in her lifetime:

Marie wrote an autobiography named ?Pierre Curie? in 1923. Here, she talked about the tragic death of her husband just 3 years after receiving a Nobel Prize with him, her family, her 2 daughters, Irene and Eve, her research and how she continued it post Pierre?s death.

Marie died on 4th July, 1934 of aplastic anaemia which is a blood disease.
Marie Curie was a revolutionary woman who left her mark on the world as one of the greatest scientists this world could ever have and perhaps the most illustrious woman of her era. Even after her death, her pioneering discoveries and the strength she showed in her lifetime continue to inspire us.