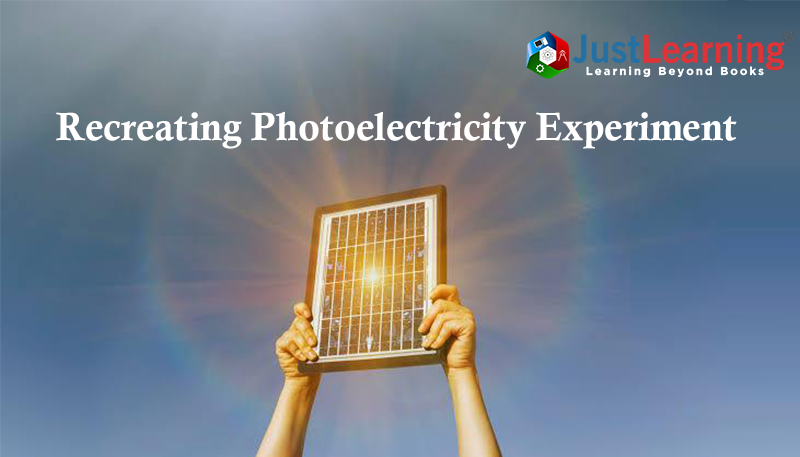 Here is an experiment to demonstrates the effect of photoelectricity that students can recreate even at home, but with proper precautions.

What are the requirements:

First drill a hole at the centre of the zinc or steel sheet, and then thread the paper clip through the hole. Bend the clip so that it creates a hook, and then tape it in place. Then, cut the aluminized mylar into a strip about 4 inches (10 cm) long, and then drape it over the paper clip so that the two ends hang down. Now place the zinc plate on top of the jar in such a way that the aluminized mylar hangs freely inside the jar.

That?s it, an electroscope has been built!

In a place like an indoor room without sunlight, where there is no ultraviolet light, just rub the PVC with the wool cloth until it shines. This rubbing will effectively create a charge on the PVC tube.

Use this charged PVC tube to stroke the zinc plate. Upon doing this, the ends of the aluminized mylar will spread apart. As the zinc plate discharges over in just fraction of seconds, the aluminized mylar will now slowly come back together. Depending on the amount of light present in the room, cover the back side of the jar with the black paper, as it will help in seeing things in a better way.

Now charge the electroscope again by stroking the plate once more with the charged PVC tube, using the same process as mentioned earlier. Once it is charged, then either turn on the ultraviolet light or allow direct sunlight to strike with the zinc plate. It will be noticed that the mylar rapidly comes together as the plate discharges.

As the PVC tube is rubbed with wool cloth, it becomes negatively charged. When the charged PVC tube is touched with the zinc plate, some amount of negative charge transfers from the PVC to the zinc, making zinc also as negatively charged. This negative charge then immediately spreads to the two arms of the aluminized mylar. As both the negative charges repel each other, the mylar pieces then spread apart with each other. Once the effect is lowered after some time, the charges resultingly leave the mylar, and the both pieces eventually come back together.

In simple words, this emission of electrons produced by a piece of metal, when struck by light, is called the photoelectric effect.

Einstein?s theory on the photoelectric effect states that electrons in the metal absorb the energy from individual photons. It says that the energy of a photon ?E? is directly proportional to its frequency ?f?. This relationship is shown in the equation:

where ?h? is Planck?s constant.

The young science aspirants can obtain a zinc plate by taking apart a non-alkaline D-cell battery which are usually labelled as ?heavy duty? batteries. Once the outer steel case is removed, there is a pure zinc shell that can be easily cut with a pair of scissors. However, it is cautioned that never take apart an alkaline battery at any cost.