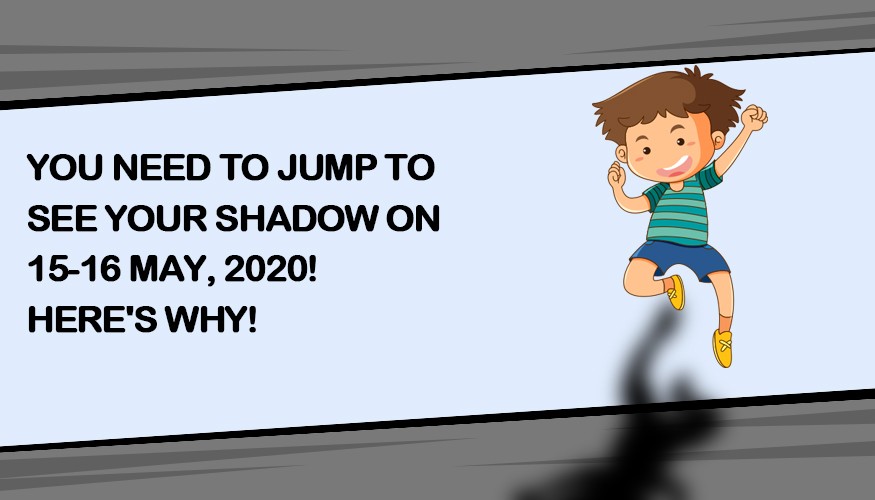 Can You Spot Your Shadow On Zero Shadow Day 2020?

So what follows you everywhere you go?

Hint: It is visible in the presence of natural or artificial lights but disappears in the dark!

You guessed it right, it?s your shadow!

Take a look around and see which all things that form shadows. Buildings, cars, trees almost everything has a shadow. Sometimes objects can block light which means that no light is able to pass through that object.

An object from which no light can pass through is called an opaque object. The easiest example is our body. Stand in the way of a beam of a light from a small torch. Ask someone to stand behind you and spot the beam of light. The person behind you will not be able to see the light since your body did not allow it to pass. Whenever light is not able to go through an object, it creates a dark area around the object. This patch where the light cannot reach is called a shadow. Opaque objects create clear dark shadows. Earlier people tracked the length of shadows throughout the day to keep track of time. The world?s earliest clock was a sun clock.

The size of the shadow varies. It depends on the angle at which the light falls on the object. Your shadow keeps changing throughout the day. It is longest in the early morning and the late afternoon. At noon, when the sun is overhead there is little or no shadow at all. As the position of sun changes throughout the day, the angle at which the rays fall on the ground also change.

As you?ve rightly noticed, your shadow is always by your side in the presence of light. But did you know twice a year no shadow is seen at 12 noon? So why does this happen??

What is a ?Zero Shadow Day??

A zero shadow day occurs when the sun is directly overhead on specific latitude, at its zenith and the rays are perpendicular to the earth?s surface. So shadows are not seen at this specific point. One must jump to see one?s shadow. Every area on the planet between the Tropic of Cancer and the Tropic of Capricorn (between +23.5 and -23.5 degrees? latitude) witness two zero shadow days in a year and people from South Mumbai, North Mumbai, Navi Mumbai can witness the No Shadow Day on May 15 and May 16 this year. How long does it last? This phenomenon lasts for a small part of a second, but the effect can be seen for a minute to a minute-and-a-half.

So what is peculiar about shadows?

? A shadow is seen when an object blocks the sun?s rays. Shadows are longer in the winter because of the angle of the sun.

? Your shadow is longest in the early morning and in the late afternoon. In the afternoon, when the sun is directly above you, your shadow leaves your side for a little while. The sun makes the longest shadows at the beginning and at the end of the day because at that time, the sun is lowest in the sky and aimed at the sides of the various things on the earth. When the sun is directly above you, there is little or no shadow because the light from the sun is falling upon you from all the sides and there is hardly any dark region.

? The way shadows were formed by the sun was utilized to make the world?s most primitive clocks, the sundials.

? Almost everything that can block light has a shadow.

? In the presence of multiple sources of light there are multiple shadows. The parts that overlap are darker.

? Make shadow puppets. You can make a shadow puppet even at home. All you need is your hand, a wall and some light. Rabbit, Kangaroo, Bird, Deer, Dog are only few of the amazing things that you can make with your hands. And if you want to make them come to life, just move your hands to make the shadows also move. Stage a puppet show at home.

? Make your own sundial. Draw a circle on the floor and place a pencil at the center of it. Mark every hour around the circle.

? Look around and spot 5 things with a shadow and see if you can spot anything without a shadow.