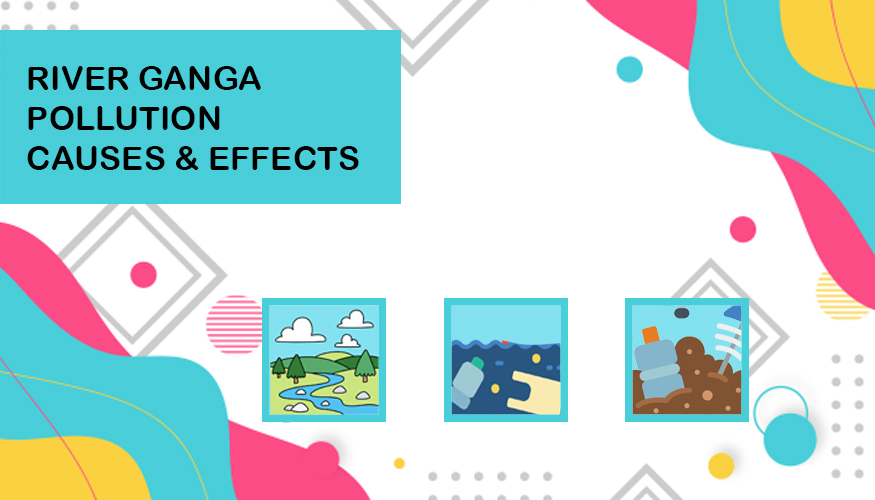 Pollution of the Ganges (or Ganga), the largest and longest river in India, poses significant or dangerous threats to human health and the larger environment. Severely polluted with human excretion and industrial contaminants, the river provides water to around 40% of India's population across eleven states, serves an estimated population of 500 million people compared to any other river in the world.

Today, the Ganges is considered to be the sixth-most polluted river in the world. Raghubir Singh, an Indian photographer, has noted that no one in India spoke of the Ganges as polluted until the late 1970s. However, pollution has been an old and continuous process in the river as by the time people were finally speaking of the Ganges as polluted, stretches of over six hundred kilometres were essentially ecologically dead zones. Several initiatives have been undertaken to clean the river but failed to deliver as desired results. After getting elected, India's Prime minister Narendra Modi affirmed to work in cleaning the river and controlling pollution. Subsequently, the Namami Gange project was announced by the government in the July 2014 budget.[10] An estimated Rs 2,958 Crores (US$460 million) have been spent until July 2016 in various efforts in cleaning up the river.

N 1985, M.C. Mehta filed a writ petition in the nature of mandamus to prevent these leather tanneries from disposing of the domestic and industrial waste and effluents in the Ganga river. The Supreme Court bifurcated this writ petition into two parts known as Mehta I and Mehta II. Mehta I [M.C. Mehta v. Union of India, [1987] 4 SCC 463]: In this petition, the petitioner requested the court to request the Supreme Court (the Court) to restrain the respondents from releasing effluents into the Ganga river till the time they incorporate certain treatment plants for the treatment of toxic effluents to arrest water pollution.

At the preliminary hearing the Court directed the issue of notice under Order I Rule 8 of the CPC, treating this case as a representative action by publishing a small gist of the petition in the newspapers calling upon all the industrialists, municipal corporations and the town municipal councils having jurisdiction over the areas through which the river Ganga flows to appear before the Court and to show cause as to why directions should not be issued to them. In pursuance of this notice, many industries and local authorities appeared before the Supreme Court.

The Court highlighted the importance of certain provisions in our constitutional framework, which enshrine the significance and the need for protecting our environment. Article 48-A provides that the State shall endeavor to protect and improve the environment and to safeguard the forests and wildlife of the country. Article 51-A of the Constitution of India imposes a fundamental duty on every citizen to protect and improve the natural environment, including forests, lakes, rivers, and wildlife.

The Court stated the importance of the Water (Prevention and Control of Pollution) Act, 1974 (the Water Act). This act was passed to prevent and control water pollution and maintaining water quality. This act established central and stated boards and conferred them with power and functions relating to the control and prevention of water pollution. Section 24 of the Act prohibits the use of any stream for disposal of polluting matter. A stream under section 2(j) of the Act includes river, watercourse whether flowing or for the time being dry, inland water whether natural or artificial, sub-terrene waters, sea or tidal waters to such extent or as the case may be to such point as the State Government may by the notification in the official gazette may specify.

What is Trade Effluent?

A Trade Effluent is any substance in the form of solid, liquid, or gaseous state which is discharged from any establishment used for carrying out any trade or industrial activity, other than domestic sewage. The State Boards are also responsible for laying down the standards for the treatment of such trade effluents. Further, the Water Act also empowers the Board to make an application to the courts for restraining pollution of water in streams and wells.

Such directions may include closure, prohibition or regulation of any industry, operation or process or stoppage or regulation supply of electricity or water or any other service. Section 15 contains provisions relating to penalties that may be imposed for the contravention of any of the provisions of this Act.

The Committee noted that the leather industry is one of the significant industries besides paper and textiles consuming large quantities of water. Most of the water used is discharged as wastewater. The wastewater contains toxic substances that deplete the Oxygen content of the clean river water in which they are discharged. This results in the death of aquatic life and emanates foul odor.

However, the respondents argued that it would not be possible for them to have the secondary system for treating wastewater as that would involve enormous expenditure which the tanneries themselves would not be able to meet.