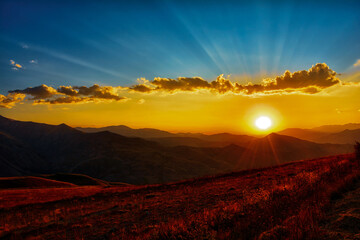 NASA Discovers Signs of Shockwaves Originating from the Sun

Gigantic interplanetary shockwaves reverberate across our Solar System, originating from the Sun and the bursts of charged particles or solar windsescaping it. But measuring such a shock in detail takes some very finely tuned instruments ? and scientists just managed it for the first time.

These shocks are made up of particles transferring energy through electromagnetic waves, rather than bouncing directly into each other ? what's known as a collisionless shock.

Understanding how these shocks happen in Earth's vicinity could prove useful on a greater scale, since these types of shockwaves are also spewed forth by things like supernovae and even black holes.

The solar winds that give rise to interplanetary shocks come in two types: fast and slow (as you can probably guess, one of the key differences between them is their speed of travel). As a fast stream overtakes a slow stream, a wave is created, causing ripples that spread out across the Solar System.

It's thanks to NASA's Magnetospheric MultiScale satellites (MMS) that we've now been able to catch a shockwave as it propagates through space ? because the four satellites that make up the MMS were only around 20 kilometres or 12 miles apart at the time, they were close enough to detect interplanetary shockwaves as they flashed by in just half a second.

"The [MMS] spacecraft obtained unprecedented high?time resolution multipoint particle and field measurements of an interplanetary shock event," the researchers write in their paper.

In particular, the Fast Plasma Investigation instruments on board the MMS were responsible for taking the all-important readings ? a suite of devices able to measure ions and electrons in space at up to six times per second.

The instrument detected two clumps of ions: one from the solar wind shockwave itself, and one pushed out of the way as the wave passed. The team says this helps to explain how energy and acceleration gets passed on as these shocks travel; due to the relatively small scale of the area covered by the MMS, it was also able to pick up small scale irregularities within the shock.

More shockwave measurements should be within the capabilities of the MMS, the team behind the latest research says ? not just strong interplanetary shocks, but also weaker and rarer ones, which scientists know less about.

And this is just the latest feather in the cap of the MMS: it's already been responsible for analysing how energy is dispersed when solar storms strike Earth's atmosphere, and for logging other key changes in our magnetosphere.

Ultimately these interplanetary shockwaves contribute to the space weather that can have dramatic effects on our own planet ? which is why scientists are so keen to learn more about them, not just to make new discoveries but to refine existing hypotheses. With the MMS readings, they now have their first close-up look.

The research has been published in the Journal of Geophysical Research.